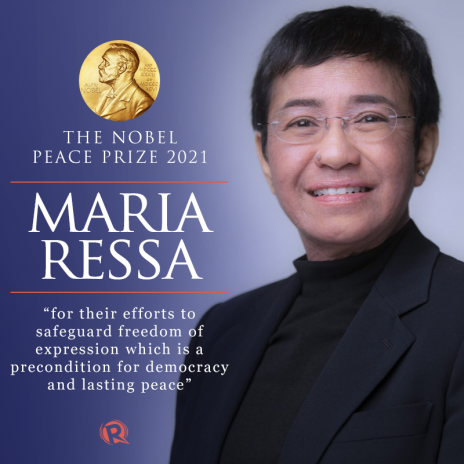 Camden Conference in the World-November

The Nobel Peace Prize this year went to 2020 Camden Conference speaker Maria Rezza, a “courageous” Philippine fighter for press freedom and founder of the Rappler news site. She won the prize jointly with Russian journalist Dmitry Muratov. Heartfelt congratulations go out to Maria from her many Camden Conference fans for her well-deserved recognition. She quickly used her heightened profile to call for legislation around the world to rein in Facebook, which she described as “biased against facts.”

Constanze Steltzenmuller, who memorably addressed “Europe’s Russian Challenge” at the 2015 Camden Conference, will be returning to participate in next February’s examination of “Europe: Challenged at Home and Abroad.” Now holder of the Fritz Stern Chair on Germany and trans-Atlantic Relations in the Center on the United States and Europe at Brookings in Washington, Steltzenmuller, on Public Radio’s The World, described Olaf Scholz, Germany’s likely next chancellor following his party’s top ranking in recent elections, as “a sort of Social Democratic male version of Angela Merkel — no surprises, nothing to be jittery about, calm, no inclinations to sort of revolutionary policies.”

Another speaker at next year’s Europe conference, Judy Dempsey, a senior fellow at Carnegie Europe and editor of the Strategic Europe blog, argued just before the election which brought Scholz to the fore that, regardless of who succeeds departing Chancellor Angela Merkel, “the status quo over defense, in which issues have been ducked or postponed, is nearing its end.” Decisions must come soon on big issues, including whether to insist on the removal of US nuclear weapons from Germany.

Before becoming ambassador to NATO from 2013-17, our 2022 speaker Douglas Lute was a general who helped coordinate the Afghanistan war effort for presidents George W. Bush and Barack Obama. He told the Washington Post’s David Ignatius, in a joint interview last month with Ambassador Ryan Crocker that his first response to seeing the last American troops leave Afghanistan in late August was “relief.” Lute added, “I think that we can be proud, if not obviously of the whole 20-year venture in Afghanistan, we can be proud and should be proud of what we delivered in these last several weeks.”

The Afghanistan-Pakistan nexus was equally the focus of environmental analysis in a piece co-authored by 2021 CC speaker Paul Mayewski on the broader Hindu Kush Himalaya, an endangered ‘water tower’ in a warming world.

China’s President Xi Jinping has been grappling with the triple threats of “corruption, inequality and financial meltdowns,” a situation that 2019 Camden Conference speaker Yuen Yuen Ang compares to the Gilded Age in America. Much as the Tom and Mac history show of 2014  used the Gilded Age precedent to help the Camden Conference community better grasp some of the excesses of this country’s economy in the 21st Century, University of Michigan professor  Ang describes how “Xi is attempting to summon China’s own progressive era,” albeit through “command and control,” rather than the “democratic methods used to fight crony capitalism” nearly a century ago in the U.S.

David Balton, a speaker at the 2021 Camden Conference, was appointed executive director of the Polar Executive Steering Committee by President Joe Biden in late September. “The United States has a wide variety of critical interests in the Arctic, a region that is undergoing profound change on many levels,” Balton was quoted as saying. “Our new team will work tirelessly to ensure our nation can pursue those interests in a coordinated and far-sighted manner.” Earlier in the summer Balton, previously U.S. Ambassador for Oceans and Fisheries and then senior fellow at the Wilson Center’s Polar Institute, celebrated the coming into force of the Central Arctic Fisheries Agreement he had helped negotiate in his ambassadorial days.

Another 2021 conference speaker, former Iceland President Ólafur Ragnar Grímsson, officiated at the inauguration of the world’s first full-scale direct-air CO2 capture and storage plant, at the Hellisheidi geothermal power plant in Iceland. The technology aims at limiting global warming by removing carbon dioxide from the atmosphere and permanently storing it in the earth.

Camden Conference 2017 speaker Gerald Knaus recently scored points in Canada, at least, with ruminations on how Europe might use Canadian policy on emigration as a model.