The 28th Annual Camden Conference, Russia Resurgent, was presented live from the Camden Opera House, and live-streamed to the Strand Theatre in Rockland, and the University of Maine Hutchinson Center in Belfast, February 20 – 22. 2015. 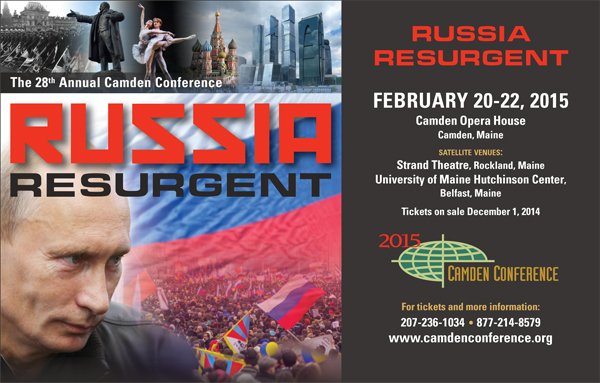 “The group you gathered was absolutely first rate and I was deeply honored to have the chance to keynote for such a high-end event.”
— Matt Rojansky, Keynote Speaker

“These speakers accomplished more in a friendly debate by educating their audience and moving past their differences of opinions than our leaders do today.” (Attendee)

“Thank you for a truly riveting experience last weekend—I came away deeply impressed with the energy of the organizers and the audience.” — Constanze Stelzenmuller, Speaker

“It was an excellently well-planned and organized conference with a highly informed audience. I found it unusually stimulating.” — Daniel Treisman, Speaker

Russia Resurgent gathered experts from Russia, China, Germany and the U.S. to offer in depth background and analysis on the Russian economy, its domestic and foreign policies, the crisis in Ukraine, and the role of history and Russian nationalism in the present circumstances. Lively presentations and discussions addressed the current situation and scenarios for the future of the Russian state and the balance of world order, and engaged the audience with diplomats and academics in a dynamic exchange.

Ambassador Nicholas Burns, Professor of the Practice of Diplomacy and International Politics at the Harvard Kennedy School of Government, returned to moderate the Conference, inviting the audience to have ample opportunity to join in the conversation.

Russia was last a Camden Conference topic in 1994. At that time, after four decades of the Cold War, Russia was engaged in a controversial sell-off of its huge mineral resources; its population was in decline; and it had few friends and admirers. The ensuing decades saw a rapid rise in its economy, a stabilization of its population, and Russia again became a force to be reckoned with, now exemplified by Russia’s move last year into Crimea and the ongoing crisis in Ukraine.

The 2015 Camden Conference offered attendees a deeper understanding of the attitudes informing Russian actions, from the experience of Vladimir Putin to the historical and political forces that have created the current narratives.