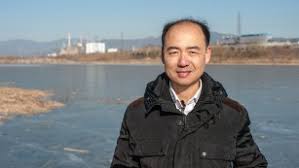 Camden Conference in the World-November

The fracturing and realignment of global power foreseen in the 2018 Camden Conference on New World Disorder was put on sharp display by past and future CC conference speakers this autumn – much of it in ways that also highlight the 2020 theme of The Media Revolution: Changing the World.

“China probably has the world’s most pro-environment media,” said Ma Jun, developer of an unofficial database that first allowed public participation in environmental governance in China and a 2019 conference favorite. He discusses the progress with Condé Nast Traveler. Now director of the Center for Finance and Development at Tsinghua University and an advisor to the People’s Bank of China, Ma also co-wrote a report this year on “Decarbonizing the Belt and Road Initiative: A Green Finance Roadmap” that emphasizes China’s ascendance to a leadership role in the fight against global warming, as the US retreats.

China has its problems, too, most conspicuously of late in Hong Kong, a situation that 2019 keynoter Martin Jacques placed within the context of British colonial policy and its current Brexit-fueled political crisis in an interview with the Global Times, a leading English-language newspaper in China.

The US-Turkey-Russia triangle is the starting point for a commentary by 2015 CC speaker Fyodor Lukyanov on the potential for the rational shaping of a new Syria, countered by “a growing reliance on emotion and propaganda, which could undermine any reasonable or well-founded intentions.” Lukyanov, editor of the monthly Russia in Global Affairs, also recently edited a new book on Russia and the Middle East that includes articles by Russian Foreign Minister Sergei Lavrov and Energy Minister Aleksandr Novak.

The likelihood of further friction between the US and long-time Nato ally Turkey was recounted by upcoming 2020 speaker Can Dundar in a Washington Post opinion piece on President Donald Trump’s letter last month admonishing Turkish President Recep Tayyip Erdogan not to “be a fool.” Noting that 88% of Turks chose the US when asked in a recent poll what country poses the greatest threat to Turkey, Dundar, the exiled former editor of a leading Turkish opposition newspaper, suggested that Erdogan might well respond to a perceived insult from Trump by “tilting further towards Moscow.”

Indira Lakshmanan brings it back home in describing how an initiative of the Pulitzer Center, where she is executive editor, is helping to keep local journalism alive by aiding local news outlets. Interestingly, the initiative is partly funded by Facebook. Lakshmanan will be a speaker at the 2020 conference and was moderator for two earlier conferences.