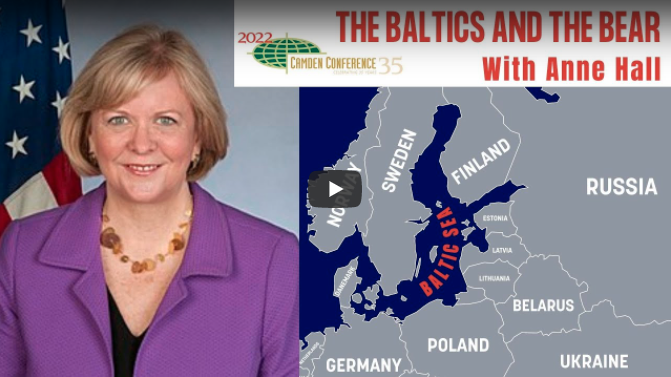 WATCH: “The Baltics and the Bear”-Ambassador Anne Hall on Zoom

The Baltic nations have proud histories as independent nations with distinct cultures and languages.  Since their independence from the Soviet Union they have built dynamic, democratic societies, with economies that rank among Europe’s most innovative.  At the same time, the Baltics continue to face threats from their increasingly hostile neighbor to the east.  Russia’s 2014 annexation of Crimea, the Suwalki Gap, and on-going Russian disinformation and cyber attacks will be among the topics discussed.

Anne Hall is a retired U.S. Ambassador and career diplomat with 32 years of experience with the Department of State in Europe, Asia and Latin America.

As the Ambassador to Lithuania from 2016-2019, Hall led a multiagency team focused on strengthening Baltic defense and security.  From 2014-2016 she served as the Principal Deputy Assistant Secretary of State for Oceans and International Environmental and Scientific Affairs, and prior to that as Director of the Office of Central European Affairs in the Bureau of European and Eurasian Affairs.  Other overseas leadership positions included Deputy Chief of Mission, Embassy Vilnius, Lithuania, and Consul General of the US Consulate General in Krakow, Poland.  She also served in China, Brazil and Colombia.

She makes her home in Blue Hill, Maine.  She chairs the Board of Advisors of the School of Public and International Affairs at the University of Maine, and has served as a mentor for Army War College Global Crisis Simulations.  She enjoys supporting the next generation of diplomats and leaders.