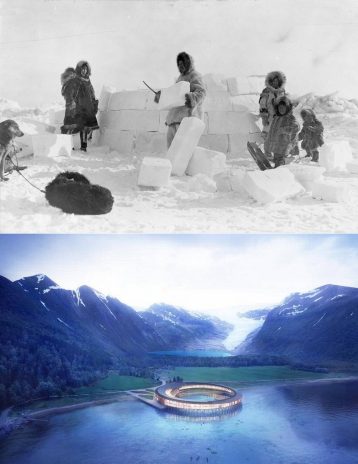 Only 4 million of the world’s nearly 8 billion people live in the remote Arctic region due to its extreme climate. The original indigenous inhabitants adapted to their environment but outsiders introduced new ways of life and came to dominate life in the Arctic – whether North Americans, Northern Europeans or Russians. They came to explore the unknown, open sea routes, exploit resources, perform scientific research, and enjoy exotic travel. Today, startling changes in climate erode assumptions and add incalculable pressures.

Viewed through the lens of the built environment – of Architecture – this illustrated presentation surveys selected settlements and structures of the past and present, in the context of The Arctic’s climate extremes.

The presenters are professors emeriti of architecture, Brooke of Temple University and Judith of Drexel University, in Philadelphia. Currently they are Center Associates at the Davis Center for Russian and Eurasian Studies at Harvard University, and Visiting Scholars at the Aga Khan Documentation Center at MIT, in Cambridge. They live in Cushing.