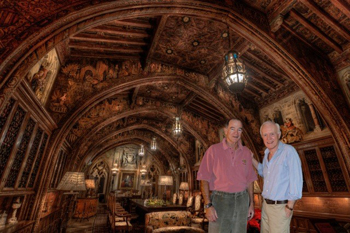 During the Gilded Age, the so-called “one percent” dominated the economy to a degree never seen before. Or since . . . up until our own time. The rich of the period set a new standard for how much they could lavish on themselves, how splendid their many residences could be, even how much they could eat and drink.

The Gilded Age in the United States was The Age of Privilege in England and La Belle Epoque in France. Excess was the rule everywhere. The period was a heyday for rascals of all kinds: Diamond Jim Brady and Lillian Russell, Maine’s own James G. Blaine, “Rutherfraud” B. Hayes and Samuel Tilden, Mark Twain, Lord Salisbury, Rudyard Kipling and Arthur Balfour, Napoleon III and Maximillian. Look out world!

Mac Deford and Tom DeMarco will return with their intriguing history road show in anticipation of the 2014 Camden Conference, ”The Global Politics of Food and Water”. This year’s Conference, will highlight the coming shortages of food, water and other resources due to an increasingly well-to-do modern world living lives of increasing excess. But, as we all know, there’s nothing new under the sun — it all began with the Gilded Age.