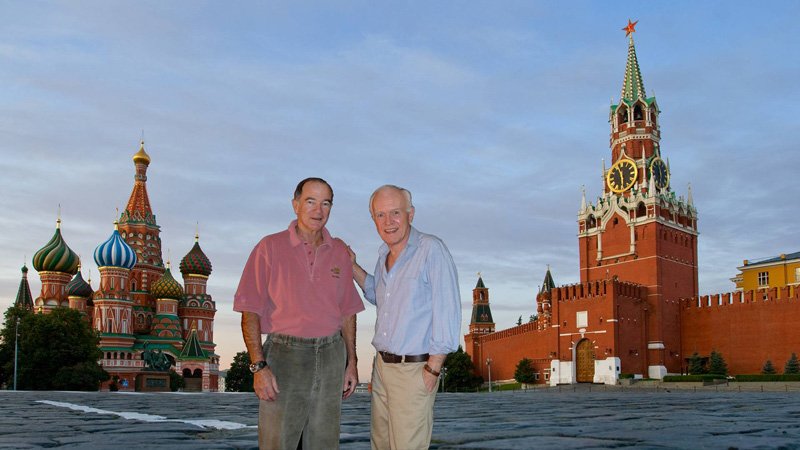 The March to Doom, on the road

It began 10 years ago with a tall order: compress 100 years of history into a 100-minute presentation and make it an entertaining complement to the annual Camden Conference. Tom DeMarco and Mac Deford pulled it off and, in the years since, they have gotten even more ambitious with their Tom & Mac Show. The ninth edition — they took one year off along the way — is titled “Russia and The March to Doom 1861-1917,” and the two friends are marching it around the state.

The week before the tour, the roadshow was not yet down to 100 minutes. It was pretty close, though, as the two men worked on it at DeMarco’s Rockport home a day after February’s first, but not last, snowstorm.

The theme of this year’s Camden Conference, which runs Feb. 20 through 22, is Russia Resurgent, but Deford and DeMarco are passing over Putin for an earlier cast of characters and the circumstances that led Imperial Russia to the war that, unfortunately, did not end all wars. When the men began working on their latest 100 minutes of history, they knew they wanted to end at what DeMarco called “a great disruption in Russian history”: Lenin’s withdrawal proposal to negotiate the Russians out of World War I in 1917.

“Russia had lost 9 million people; the temperature was 33 below zero when the revolution began. How did they get in such a pickle?” DeMarco said.

In trying to answer that question, Deford and DeMarco worked their way back until they found what they thought was the likely first step on The March — to 1861 and what DeMarco called “a moment of reasonable optimism.”

On March 4, 1861, the same day Abraham Lincoln was inaugurated president of the United States, Russia’s Czar Alexander II famously freed the serfs. Russian serfs were not the tenant farmers the term usually implies; they were “bought and sold on a cash-and-carry basis” like slaves, said DeMarco. But the czar came up with an idea that sidestepped the economy-based objections Lincoln faced two years later: using funds raised by floating a huge bond with the French, he essentially bought all the serfs from their owners.

“And, as so often happens, the liberalizing czar opens the gate a little bit and it becomes a floodgate,” said Deford.

The following years also led to a deluge of wonderful characters, names attendees will be familiar with, but whom DeMarco and Deford bring to life with anecdotes derived from both public history and private correspondence — DeMarco calls the letters between cousins Czar Nicholas II and German Emperor Wilhelm II “a hoot.”

“They were known as Nicky and Willy,” said Deford, adding “[German Chancellor] Bismarck was a great historical figure, too.”

Other notables who show up in this year’s Tom & Mac Show include Czaritsa Alexandra, Napoleon, Rasputin, anarchists Mikhail Bakunin, Emma Goldman and Prince Peter Kropotkin, Lola Montez, Trotsky, Lenin and Krupskaya. In all, the presentation is divided into 16 sections and is illustrated by hundreds of slides and some video.

“We’re fortunate to have Geoff Parker doing AV for us in Rockport,” said DeMarco; the Friday show is co-sponsored by the Rockport Public Library.

Adding to the lively historical personalities are those of the presenters, whose serious credentials belie their light-hearted approach. DeMarco is author of 13 books (the latest a sci-fi novel) and a principal of the Atlantic Systems Guild, a technology think tank with offices in the United States, United Kingdom and Germany. Free Press columnist Deford is a retired Foreign Service officer, with service primarily in the Middle East, who had a subsequent career with Merrill Lynch International, mostly in South America and Asia.

An important piece of “The March of Doom” puzzle is the Hague Peace Conference of 1899, which addressed concerns that reverberate in these days of Russia Resurgent.

“It was the first attempt to talk about limiting arms, in a period of ferocious arms buildup,” said DeMarco, adding that American diplomat Andrew Dickson White, president of the American delegation at the conference, is one of the show’s subjects.

“And as you will see, he was not the only one cynical about the Hague Conference,” said Deford. “One of the few who are not is Tom DeMarco!”

The interplay between Deford and DeMarco is a key element of The Tom & Mac History Roadshow and one reason it returns year after year. After all, it’s not as if they will run out of material.