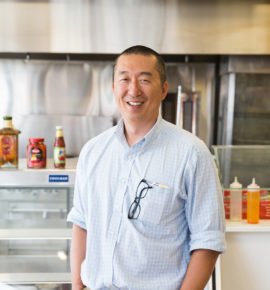 Tae Chong, a second-generation immigrant from Korea, spoke recently at the Camden Public Library as part of the Camden Conference’s free Community Events related to the 30th anniversary Conference topic “Refugees and Global Migration: Humanity’s Crisis.”  His personal story was compelling and pertinent and centered on Maine. His demographic analysis of Maine’s current and future population spoke volumes about Maine’s future. We are in a demographic bubble, with few young people to replace the aging population. The only population that is actually growing, that is, has larger number of young people than old people, is the immigrant population. Tae also had some cogent recommendations of how to take business advantage of the growing immigrant population, both as a market and a resource. For instance, he said Boston (yes Boston) has the greatest portion of immigrant population in the country – and they are a potential market for our farmers, if the farmers can identify and market “ethnic” foods. He also told stories of how hotels in Portland are hiring and training immigrants, in a market that is desperate for skilled employees.

If you missed Tae’s talk in Camden or want to hear more from him, watch his recent TED talk “Why we should matter to each other.”

In this inspiring talk, Tae Chong shows how and why we should all matter to each other in order to be not only a more inclusive, understanding, compassionate and empowered people, but also more effective in our collective ability to make social progress.

Tae Chong is a business advisor with CEI’s StartSmart Program.  StartSmart is a nationally recognized economic development program that assists immigrants and refugees start and manage their businesses.  Tae has over twenty years’ experience working with the immigrant and refugee populations in Maine.  He has worked with this population as an educator, advocate, policy maker, social service provider and now as a business advisor.  He has also held leadership positions as co-chair of the refugee advisory council for the state of Maine’s DHHS Department, as a board member of the NAACP, LULAC, and Asian American Heritage Foundation and as board member of University of Southern Maine’s Department of Social Work.  Currently, Tae is serving on Catholic Charities Refugee and Immigrant Services advisory board and as a board member of the Friends of Portland Adult Ed.  He holds a B.S. degree in Political Science and a Masters in Business Administration from the University of Southern Maine.