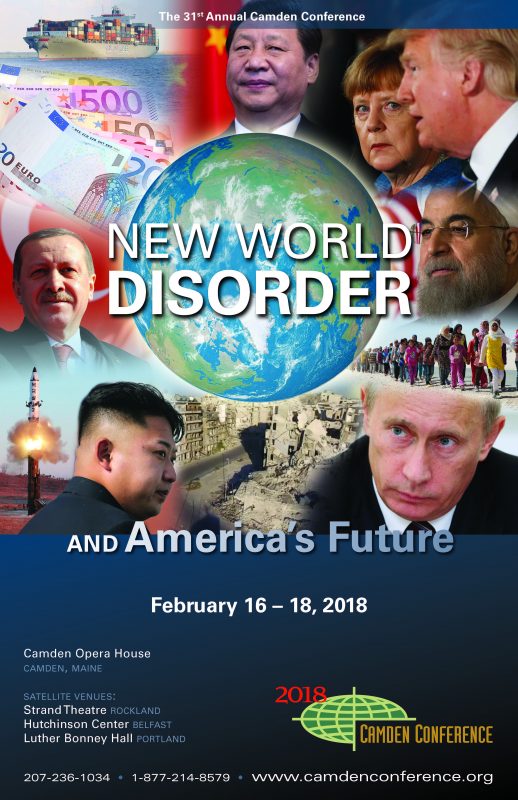 Registration is now open for the 31st annual Camden Conference

Registration is now open for the 31st annual Camden Conference, New World Disorder and America’s Future, February 16-18, 2018. The Conference will explore shifts in global power and the implications for major players—especially the United States, China and European countries—in pursuing their national interests. Conference speakers will address the impact of globalization, the rise of nationalism and populism, transformations in global economies, and the management of a range of future threats such as climate change and population growth.

Tom Ashbrook, award-winning journalist and host of the nationally syndicated, public radio call-in program, “On Point”, will be the moderator, and Stephen Walt will be the keynote speaker. Walt is the Robert and Renee Belfer Professor of International Affairs at Harvard University and is a prominent figure in the realist school of international relations.  His books include The Origins of Alliances, which received the 1988 Edgar S. Furniss National Security Book Award, and Taming American Power: The Global Response to U.S. Primacy, which was a finalist for the Lionel Gelber International Affairs Book Award and the Arthur Ross Book Prize.  His weekly Foreign Policy column can be found at http://www.foreignpolicy.com/voices/walt. His most recent book, The Israel Lobby and U.S. Foreign Policy (co-authored with John J. Mearsheimer), was a New York Times best-seller and has been translated into more than twenty foreign languages.

Other speakers for the weekend include: Gerald F. Seib, Wall Street Journal columnist and commentator and former Washington Bureau Chief; Matthew Goodwin, Professor of Politics, University of Kent, and Senior Visiting Fellow at the Royal Institute of International Affairs, Chatham House; Evan S. Medeiros, Manager of the Asia Program at the Eurasia Group, former Special Assistant to President Obama and Senior Director for Asian Affairs at the National Security Council (NSC); Avril D. Haines, Former Principal Deputy National Security Advisor to President Obama and previously Deputy Director of the Central Intelligence Agency; Cleo Paskal, Associate Fellow in the Energy, Environment and Resources department of the Royal Institute of International Affairs, Chatham House, and member of the faculty of Manipal University (India); Natalie Nougayrède, columnist and commentator, The Guardian (London) and former editor of Le Monde (Paris); and Charles (Chas) W. Freeman, Jr., former US Ambassador to Saudi Arabia and senior State Department and Defense Department official. More information about the speakers and the Conference can be found on the website: www.camdenconference.org/2018-camden-conference/.

The Camden Conference speakers will be live at the Camden Opera House, and the program will also be live-streamed to the Strand Theatre in Rockland, the Hutchinson Center in Belfast, and Luther Bonney Hall, USM in Portland. This year a Pay-Per-View option is available, allowing viewers to watch from home.

The Conference has sold out in previous years, so register soon. Registration is available on the website www.camdenconference.org or by calling the conference office at 236-1034.