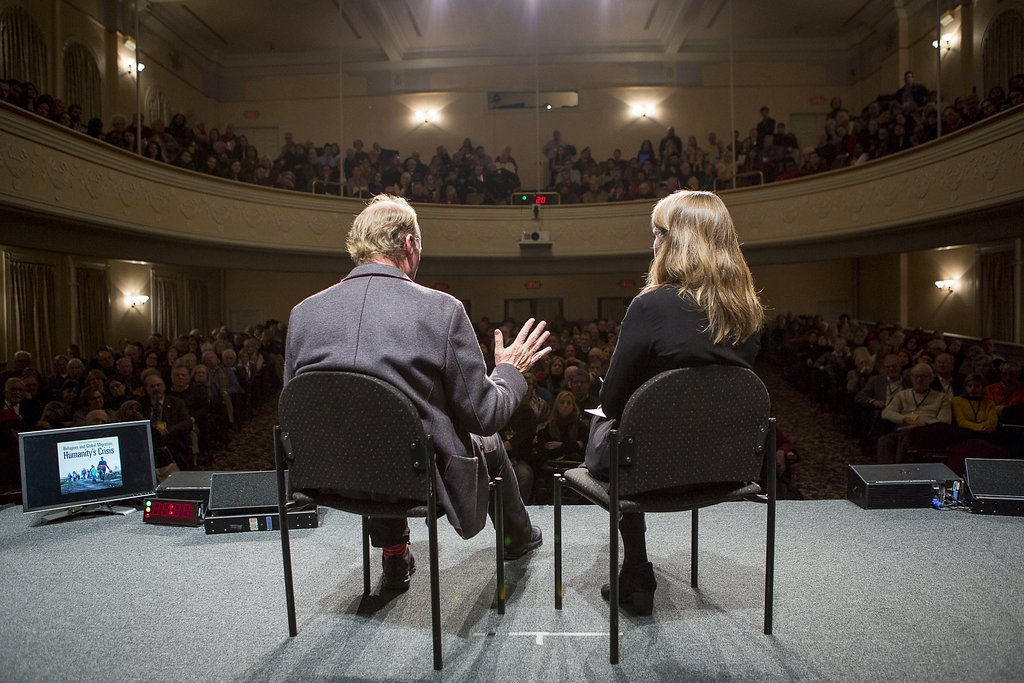 Last weekend’s 30th Camden Conference once again showed the uncanny knack conference organizers have for selecting a topic, a year in advance, that turns out to be front and center in global consciousness by the time we all get to Camden.

The Conference opened with the testimony of two Maine refugees: Layla Mohamed from Ethiopia and Ali Al-Mshakheel of Iraq. Their stories gave a face to the issues discussed at the Camden Opera House.

Two different sets of refugees dominated the Conference: those from Syria, the Middle East, and Africa, and those from Latin America. By far the largest single group of recent refugees in the more than 20 million refugees documented by the United Nations comes from Syria. Yet the United States allows few of these people to enter. For all of President Trump’s comments about the need for “extreme vetting,” the U.S. receives but a trickle of refugees from the Middle East, less than 40,000 in 2016. Many of these refugees who did get to the U.S. had been waiting at least two years and more often five to 10 years in refugee camps. All have been thoroughly vetted, according to Conference participants who work with refugees. These people on the ground do not believe that terrorist infiltration from refugee resettlement is an issue for the U.S.

Our problem in the United States is not from the refugee crisis the Europeans are dealing with. Our problem is with the numbers of undocumented aliens, mainly Hispanic, in this country. By most counts undocumented aliens now total more than 11 million in the United States. Most of these people have been living here for years, even decades. America’s southern border is already well-sealed by the accounts of those at the Conference. One panelist noted that the net flow of migrants with Mexico last year was negative, that is more returned to Mexico than entered the U.S.

Successive administrations since that of George W. Bush have attempted to deal with the problem of illegals. Over the years since 2001 several bi-partisan attempts have failed, principally owing to the intransigence of the Republican-dominated House of Representatives. In 2013, the latest attempt at immigration reform passed the Senate with 68 votes, a level of agreement seldom seen in the Obama years. The measure moved to the House where most agreed that sufficient votes from both parties made passage likely. However, House Speaker John Boehner refused to allow a vote on the legislation because he believed a majority of his Caucus did not support it. Oh for the days of Tip O’Neill and Ronald Reagan.

On these issues of U.S. immigration policy, the Conference was fortunate to have the perspectives of Muzaffar Chisti, the director of the Migration Policy Institute of the NYU School of Law. Chisti believes that an eventual solution must include legal status for those long-term illegals in the country, a provision of the 2013 Senate bill, and a path to eventual citizenship. He points out that whatever a revised Trump policy on immigration may say, it will be impossible, physically and administratively, to deport 11 million people.

The U.S. problem should be addressable — with will, though we may have to wait for the next administration. The European problem, the focus of much of our discussion in Camden, is more intractable. The European Union is in crisis over the flow of refugees. The crisis has given rise to right wing nationalist parties in many European countries.

Europe does appear to be figuring this out — with the lead of Germany and the cooperation of Turkey, the country that holds the majority of the recent refugees. On the situation in Europe, the Conference was fortunate to have the participation of two speakers, in particular. Gerald Knaus, the chairman of the European Stability Initiative, is doing important work in illuminating what is working and not working in current European efforts. Gerald was the voice of the thoughtful man in the trenches. Knaus is cautiously optimistic that the recent E.U.-Turkey agreement can work. Check out his blog at rumeliobserver.eu. The other speaker of note on these issues was Bruno Stagno, the deputy executive director of Human Rights Watch. He is a former foreign minister of Costa Rica and its former ambassador to the United States.

Also noteworthy at this year’s Conference was a new moderator, Jeanne Bourgault. Bourgault was excellent in leading and focusing the Q&A sessions that are the heart of the “Camden approach.” She is a seasoned veteran of international work and, an added bonus, she hails from Blue Hill. In that same vein, Kelly Clements, who provided valuable insights in her capacity as United Nations deputy high commissioner for refugees, is a product of Old Town High School

Given the difficult, if not to say, intractable nature of global refugee issues, the last question for the panel of participants was how they handled the stress and disappointments. Several mentioned being sustained by small triumphs, the support of dedicated colleagues, and even their experience at Camden. In fact, Bruno Stagno suggested that the Conference go on the road to take this approach across the country. Now there is an endorsement to cherish.

Ron Bancroft lives in Cumberland and has been attending the Camden Conference for the last seven or eight years.