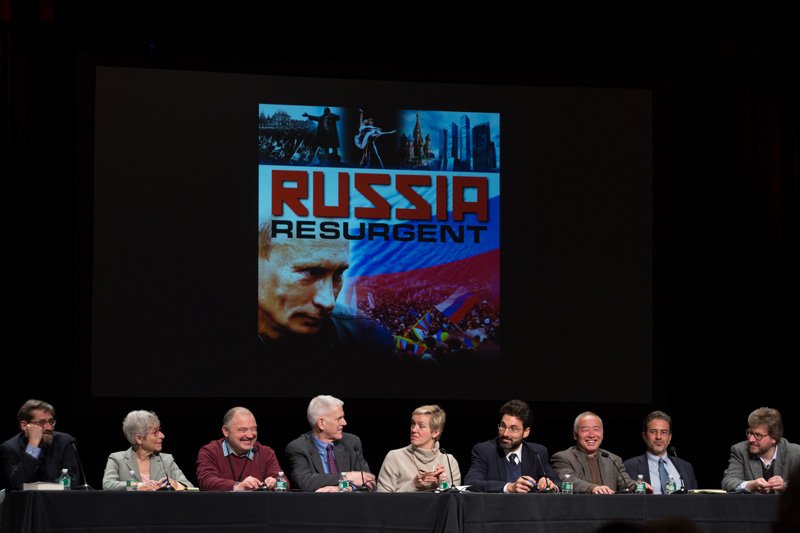 Reflections on the Camden Conference

My wife and I are just back from the Camden Conference. This year’s topic was “Russia Resurgent.” With Russia’s aggressive support of rebels in Eastern Ukraine and its earlier annexation of the Ukrainian Crimea, the topic could not have been more timely. Reflecting this, all three Conference venues: the Camden Opera House, the Strand in Rockland, and the University of Maine’s Hutchinson Center in Belfast were sold out, over 900 attendees in all — quite remarkable for a cold and snowy February weekend in Midcoast Maine.

More remarkable is the Conference’s ability to attract experts from all over the world. Well-known Russia scholars and experts from the United States included Matthew Rojansky, the director of the Kennan Institute at Princeton, Nina Tumarkin, professor of Russian History at Wellesley, Thomas Graham, a Senior Fellow at Yale and managing director of Kissinger Associates, and Steven Pifer, former US Ambassador to Ukraine.

In addition, two prominent Russian policy experts from Moscow provided differing assessments of “the real Russia,” a German expert from Brookings provided a perspective from the leading European power involved with Russia, and the current Bulgarian Ambassador to the United States related lessons of the transition from Soviet Satellite to EU member.

These were a particularly accomplished set of participants — all with strong views, strongly stated. This made for lively discussion. The Conference format of individual presentations followed by moderated small group discussion with audience questioning served to highlight significant areas of both consensus and differences. There was challenge for the moderator, Nicholas Burns, in all this, but Ambassador Burns, now at the Kennedy School and a dedicated “Camdenite” is a master at sharpening questions and making sure everyone is heard from.

So what did I learn in all this? First, I got a much better sense of how ordinary Russians view the conflict with Ukraine and how they view their leader, Vladimir Putin. Putin has extraordinary support — his approval rating is something over 80 percent, even in the face of significant damage to the Russian economy from falling oil prices and Putin’s reluctance to embrace needed economic reforms.

Putin’s appeal to traditional “greater Russia” themes strikes a strong patriotic chord with most Russians. The links of Ukraine and Russia go all the way back to Russia’s founding. Many Russian leaders, including Nikita Khrushchev, have come from the Ukraine. Even though many Ukrainians today are looking westward for their future, many Russians view Ukraine as part of Russia’s core. They will not go gently into the night.

Second, Ukraine desperately needs to address its own economic and political weakness, in essence to show that it can be a viable independent state. In many ways the country has squandered the opportunity of its “Orange Revolution,” now more than 10 years old. Corruption is endemic and the economy is in shambles, largely because there has not been sufficient political will to address these issues.

A third area of lengthy discussion dealt with the role of the West in countering the aggressive politics of President Putin. One revealing comment on this issue came from Matt Rojansky who said, “Obama believes in rules, Putin believes in actions.” Since the West has explicitly said it will not resort to force to settle the Ukrainian situation, Putin feels free to strengthen military support of the pro-Russian rebels in the East, if only to continue to de-stabilize the current Ukrainian government. Continued unrest may be all the end-game here that Putin needs.

A fundamental question then is “should the West provide significant arms and equipment to Ukraine.” On this there is disagreement. Ambassador Pifer is in the “provide arms” camp on the grounds that we need to make it harder on Putin to support the rebels. This argument runs to the fact that Putin is confronted with significant internal economic problems. Making his task more difficult in Ukraine could cause him pause. Many others cautioned that such actions would simply play into Putin’s hands by strengthening his rationale that the West was behind the “illegal revolution” in Ukraine.

What will happen in Ukraine still is a question mark. The best that can be hoped for is an enduring cease fire. Thomas Graham from the Kissinger Group offered what seemed to me to be the best advice for the future Western policy. He suggested that Russia is a declining power that will eventually be forced to reconcile its diminished position in the world. The West should not overreact to Ukraine but should continue to work with Germany and the EU to keep consistent but moderate sanctions in place. As long as Russia does not try to destabilize any other European countries, the West should let the situation in the Ukraine play out — without escalating militarily, but with continued economic support if the Ukrainian government shows the political will to address its significant issues.

Ron Bancroft is a resident of Cumberland and longtime Conference attendee.