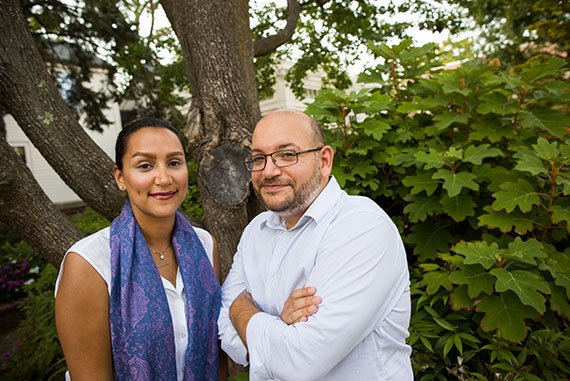 New Speakers for the Camden Conference

Jason Rezaian and his wife Yeganeh have been added to the speaker roster for the upcoming Camden Conference. They are sure to add a strong voice to the current state of the media in authoritarian countries. Rezaian is a “Global Opinions” writer for The Washington Post, a CNN contributor, and a vocal advocate for press freedom around the world and for Americans falsely imprisoned abroad.  From 2009 to 2014, he was the lone American correspondent working in Iran for the international press.  In July 2014, he and his wife, Yeganeh, were detained by Iranian authorities.  The following year, he was convicted of espionage in a closed-door trial in Tehran and imprisoned until his release in January 2016.  Mr. Rezaian’s story of his ordeal, Prisoner:  My 544 Days in an Iranian Prison, was published in January 2019 and has now been reissued in paperback.

Yeganeh Rezaian is an Advocacy Associate at the Committee to Protect Journalists. An Iranian journalist now living in Washington, D.C., she has written pieces for The Washington Post and The Lily. She previously worked as the communications director at the World Affairs Council-Washington, D.C.  While living in Iran, Ms. Rezaian covered Iranian political, social, and economic news for Bloomberg News and The National until she and her husband, the former Washington Post Tehran bureau chief Jason Rezaian, were detained by Iranian authorities in 2014.   The Conference is coming up on February 21-23, live at the Camden Opera House and live streamed to the Strand Theatre in Rockland, the Hutchinson Center in Belfast and Hannaford Hall in Portland. Seats are still available in Rockland and Portland. Camden and Belfast are sold out but those wishing to attend at either can call the office to put their names on the waiting list.