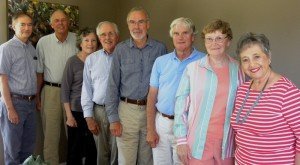 It comes on top of the regular “community events” involving talks, films and other activities that are also offered free of charge by the Camden Conference each year.

The discussion series will cover five broad topics, all related to the February 2014 Camden Conference topic, “The Global Politics of Food and Water.” The first discussion session, to be held at the Camden Public Library, is on “The Coming Food Crisis: How to Feed the World in 2050.”

The United Nations Food and Agriculture Organization estimates that worldwide demand for food will increase by 70% by 2050. However, farmers will need to produce the increased amount with very little to no increase in land and perhaps even less water, all the while dealing with the effects of climate change, which are already having a negative impact on food production.

The second topic is “Fresh Water Scarcity – The Global Crisis of Our Time.” Over the past 60 years, the amount of fresh water available per person has decreased fourfold. Many rivers no longer flow all the way to the sea. Half of the world’s wetlands have disappeared. And major ground aquifers are being mined unsustainably.

Some 70% of fresh water use is for agriculture and is vital to food production. Year-to-year changes affecting food and water availability can be gradual, yet the cumulative effect over a period of years can be devastating. These gradual changes often fail to grab headlines — making it all the more important to raise awareness through discussion.

The three other topics are: “Oceans at Risk,” “Genetically Modified Foods,” and “The Impact of Climate Change on War and Conflict.” All are critical issues of our time — and for future generations.

People who regularly attend the Camden Conference in February will find these groups a great way to prepare and make their experience of the conference even richer. The discussions, which are free, are also designed to appeal to the young, who will feel the greatest impact from the important issues being explored.

The discussion sessions will be much like a book group, but with less preparation required. For each event, participants will be asked to read articles and/or watch videos. The required preparation time will be roughly one hour per session.

The reading lists will appear on both the Camden Conference website and the websites of the libraries at which the events are held. All articles that you are asked to read are available online without charge or subscription. In addition, paper copies are available at the library desk. The YouTube and TED videos can be watched at home or on the libraries’ computers.

A facilitator from the local community will be present at all the discussion sessions to help guide the conversation. This person will not be an expert on the topic, but rather someone whose role it is to keep the discussion on track.

This year the mid-coast libraries of Camden, Rockport, Belfast and Rockland are involved. Libraries in Portland, Auburn, Brunswick and Falmouth will also participate. This Camden Conference website and the websites and circulation desks of the participating libraries will be the best source of further information about the discussions.