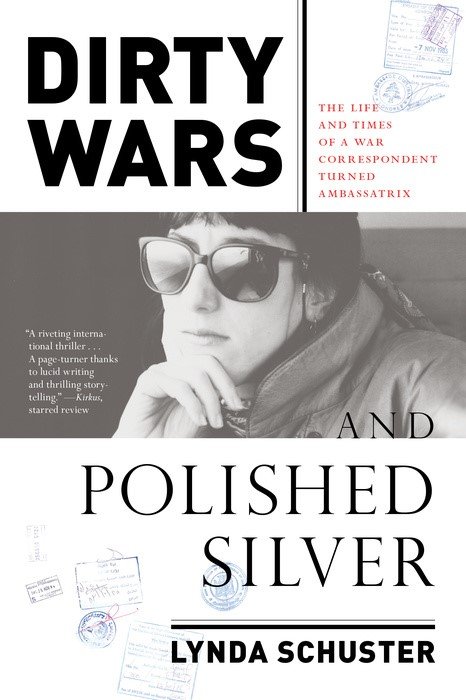 Lynda Schuster, former foreign correspondent for The Wall Street Journal and The Christian Science Monitor, will be celebrating the July 18 release of her latest book, Dirty Wars and Polished Silver: The Life and Times of a War Correspondent Turned Ambassatrix, at Left Bank Books in downtown Belfast on Friday, July 28, at 7 pm.

Schuster’s book is receiving widespread early acclaim, and she will be interviewed by CNN’s Chief International Correspondent Christiane Amanpour later this month.

While growing up in Detroit in the 60s and 70s, Schuster felt certain life was happening elsewhere, and as soon as she graduated from high school, she set out to find it. Dirty Wars and Polished Silver is Schuster’s story of her life abroad as a foreign correspondent in war-torn countries and later, as the wife of a U.S. ambassador. It chronicles her time living through a war on a kibbutz in Israel, reporting on uprisings in Central America, dodging rocket fire in Lebanon, and grieving the loss of her first husband, a fellow reporter, who was killed in Honduras only 10 months after their wedding. It is a memoir that reads with the exhilaration of an international thriller.

But even after her second marriage, to an American diplomat, all the black-tie parties and personal staff and genteel “Ambassatrix School” grooming in the world could not protect her from the violence of war. Equal parts gripping and charming, Dirty Wars and Polished Silver is a story of Schuster’s quest for self-discovery—only to find herself, unexpectedly, more or less back where she started: wiser, saner, more resolved. And with all her limbs intact.

The President and CEO of Newseum in Washington, D.C., Jeffrey Herbst, has said that Dirty Wars is “the story of a woman breaking down barriers to become an accomplished war correspondent, and an on-the-ground narrative of the conflicts that wracked the world in the 1980s and -’90s. It is also a tale of love, great loss, and love again that demonstrates the resilience of the soul. I recommend it to all, but especially to those who wonder how to succeed in life by following both their head and their heart.”

Schuster’s writing has also appeared in Granta, Unte Reader, The Atlantic, and The New York Times Sunday Magazine. A piece that she wrote in 1996 for the Utne Reader – “The Death of a Journalist: A Love Story” – about the death of her first husband, was widely reprinted throughout the world.

The public is warmly invited to this free event. Reservations are strongly recommended, as seating is limited. Please call (207-338-9009) or email (leftbank@myfairpoint.net) to reserve seats. If you can’t make the event, the bookshop is happy to reserve copies of Dirty Wars for you and have Schuster sign them, if you wish. Left Bank Books is located at 109 Church Street in downtown Belfast, across the street from the police station. Ample parking is available in front of the shop and in an adjacent public lot.