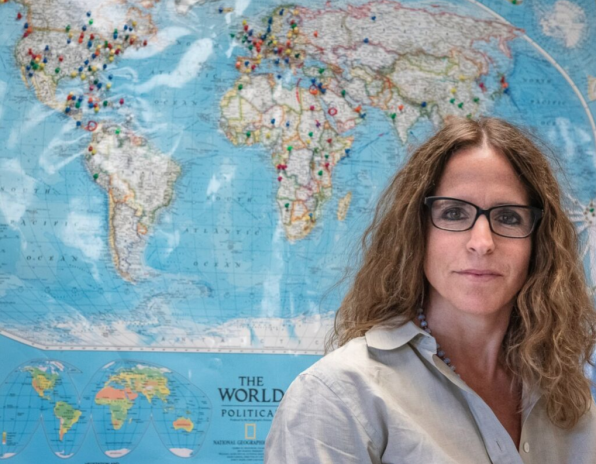 Edward Little High School social studies teacher Erin Towns in her classroom, where a giant map of the world shows pins indicating places she and her students have visited. Russ Dillingham/Sun Journal

Erin Towns was teaching social studies one day in 2008 when a student asked her,”Why does this matter?” It wasn’t an outlandish thing to ask. In her early years of teaching, Towns had struggled with that question herself.

That same day in 2008, she received an administration email with the subject line, “Are you interested in teacher travel?” She headed to the central office and promptly gave her answer: Yes.

Since then, Towns has traveled to more than a dozen countries. Sometimes she’s part of fellowship programs for teachers. Other times she leads student trips.

Always she brings what she’s learned back to the classroom, an answer to the question, “Why does this matter?”

Why social studies? I am the product of avid historians. I never saw Disney World as a child as a result. My parents preferred to give us historical experiences including Civil War battlefields and countless museums. My mother was an active participant in her local historical society and volunteered my brothers and I for all kinds of events. We were usually dressed in some sort of period clothing. I even marched in a fife and drum corp throughout my early childhood playing the fife in the nation’s oldest fife and drum corps. I was taught to value and appreciate history as a source to inform the present. My mother loves to corner family and relate numerous stories about our ancestors and relatives. She will tell anyone about them. Ask my son.

Where have you gone? Since 2008, I have been awarded professional development opportunities through competitive grant applications. Most recently I traveled with Lindblad Expeditions aboard the National Geographic Sea Lion to Southeast Alaska and British Columbia as part of the 2018 National Geographic Grosvenor Teacher Fellows Program. The same year, I traveled to Germany with the German-American Fulbright Commission and in 2017 with the University of Pittsburgh to Ethiopia for a month. In 2014, I traveled to China with the Fulbright Hays Summer Seminar Program administered by the National Committee on U.S.-China Relations, and in 2013 with the U.S. Department of State and the Fulbright Program to Kazakhstan as part of the Teachers for Global Classrooms Program. My first international development program was in 2008 when I traveled as a guest of the Japanese government as part of the Japan Fulbright Memorial Fund Teacher Program. Aside from that, I have also traveled extensively with students domestically and internationally. Most recently we took 50 students for tours in France, England, Wales and Ireland. A few years ago, we took six seniors for a development project high in the mountains of Quito, Ecuador, which were really amazing and eye opening. Aside from that, students were given a historical tour of Mexico’s Yucatan Peninsula and the Spanish coast.

Which was your favorite country to visit? I thoroughly enjoyed every country I visited and had interesting and amazing experiences in each. I loved the attention to detail I found in Japan, the unmatched level of hospitality I experienced from my Russian and Kazakh hosts, the reverence for elders in China, the warm welcome of children in Ecuador, the German dedication to refugee relief and organization, Ethiopian’s joyful practice of religion on Sundays, and the Haida and Tlingit people’s perseverance in the face of cultural genocide. It is impossible to pick a favorite.

What do your students think of your travels? My students get to experience and hear about life around the world from stories, photographs, videos and 360-degree digital imagery that, when viewed using a cardboard viewer, puts them on the ground right next to me. Albeit it is not the same as being there, it captures imaginations, makes them ask questions and shows them that they too can see the world one day. I would say that the stories about daily life or experiences that made me nervous or elated have the biggest impact in terms of reaction and questioning. They love to hear the stories about what I had to eat the most I would say. I think food is one of the most asked about things in terms of my world travels. Everyone has to eat, and food serves as a conduit for civilization, culture and technology. I try to get students thinking about why people eat what they do, instead of having them concentrate on specific items of food being “weird” or “gross.” I constantly strive to get my students to recognize other perspectives and use geographic inquiry when it comes to what people eat around the world.

What’s your favorite travel story? Probably the one where my travel partner and I thought we were being held captive in a truck stop hotel in Kazakhstan. I am a runner who likes to run every morning before my day starts. The same applies no matter where I am in the world and I have had some interesting runs. We got up the first morning and got ready and met at the “front door.” The door was locked, which we thought was strange and went to the front desk to seek help. The man spoke fluent Russian and did not understand the two of us, so he followed us to the door, looked at it, and said no. This distressed us as we felt our movement was being restricted and we didn’t know why. We asked again. He pointed to his watch. “No.” My heart was pounding. I pointed to my shoes and played a little charades. The man rolled his eyes and with an exasperated sigh motioned us to follow him up a flight of stairs to the actual front door, which was of course wide open. We had been standing at the door for the cafeteria. It wasn’t time for breakfast yet. This taught me a few lessons about fear, ego, ethnocentrism and cultural relativism. No one wants me as a captive. They would just like me to get the right door and leave them alone so they can get their work done.

What’s the one thing you’d never travel abroad without? I do not travel without my late father’s compass. It reminds me of who I am, the lessons he and my mother taught me about perspective and acceptance of people and the importance of learning and traveling. I do not travel without first carefully researching where I am going and taking safety into serious consideration. I register with the U.S. Department of State website to keep my movements clear and to receive travel notices while abroad. It is practical and safe to do so in my opinion. Information is a powerful tool for safety.

Any future travel plans? I would like to swim with whales in the Kingdom of Tonga and travel to Tanzania when my son Gavin is finished with college at the University of Southern Maine. For now, I am here in the best place in the world. Maine. I always love coming back to it. There is truly no place like home.