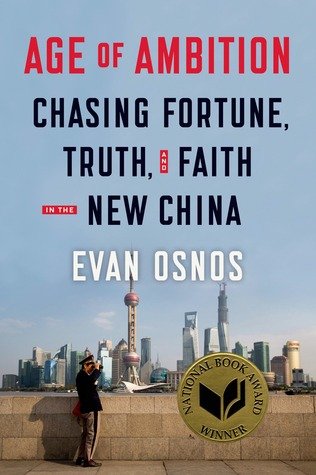 One can’t read or listen to the news today without noticing a headline about China. In December, York Public Library featured a program on China and its role as a global superpower. On Wednesday, January 9, a follow-up program and book discussion will explore China as a country experiencing growing pains and the cultural, social, and economic conflicts that arise from such growth. The program will be presented by Edwin H. Pierce, former social studies teacher at Marshwood High School, in conjunction with the Camden Conference 2019.

Attendees are encouraged to read beforehand the 2014 book, Age of Ambition: Chasing Fortune, Truth, and Faith in the New China, written by Evan Osnos. The author lived in China for five years as a reporter for The New Yorker, and the book addresses the dualities and dramas continually in motion in modern China. He presents the Chinese Communist Party which, though powerful, operates under constant threat of being undermined by corruption, a fluctuating economy, and the development of a middle class. Osnos investigates these clashes not only on a societal level, but on an individual one as well. The book can be borrowed through the Minerva Library system, so call 207-363-2818 to reserve a copy, or request it online at www.york.lib.me.us or your local library.

During his tenure at Marshwood (1997-2014), Pierce designed and implemented two courses that focused on the study of East Asia, the first Asian studies courses ever offered at the school. His expertise also touches on the fields of Art History, World History, World Religions, Civics, and Middle Eastern Studies. He has also traveled and explored the East extensively.

The book discussion will begin at 7pm on January 9. Space is limited, so please register at York Public Library in advance by calling 207-363-2818.