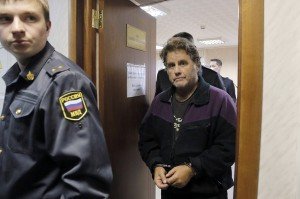 A police officers guards the US captain of the Greenpeace ship ‘Arctic Sunrise’, Peter Willcox in a court room in Murmansk, Russia, on Thursday, Sept. 26, 2013. A Russian court on Thursday jailed Peter Willcox who was captain of the of Greenpeace ship ‘Arctic Sunrise’ and member Greenpeace team protesting near an oil platform last week. Two members of the group were detained Sept. 18 in their attempt to scale the Russian Arctic platform. The Coast Guard seized Greenpeace’s ship the next day and towed it with the 30 activists aboard, to Murmansk. The activists are being investigated for piracy. (AP Photo/Efrem Lukatsky) ** Usable by LA and DC Only **