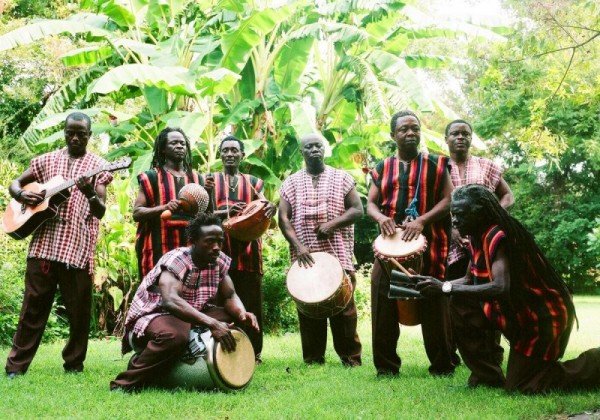 Sierra Leone’s Refugee All Stars have risen like a phoenix out of the ashes of war and enflamed the passions of fans across the globe with their uplifting songs of hope, faith and joy. The band is a potent example of the redeeming power of music and the ability of the human spirit to persevere through unimaginable hardship and emerge with optimism intact. From their humble beginnings in West African refugee camps, Sierra Leone’s Refugee All Stars have performed on some of the world’s most prestigious stages and matured into one of Africa’s top touring and recording bands. They also now play an important diplomatic role as spokespersons and for the ever-increasing millions of refugees worldwide.

Rooted in West African highlife and palm wine music, as well as Jamaican reggae, the band takes on elements of many other genres of African music and pop in their songs. Though the group is not afraid to tackle political topics, the band’s lyrics are, by and large, spirit-filled and uplifting, which fits in with their original intent — to provide some joy and hope in the midst of devastation.

The Camden Conference is a proud to serve as a promotional partner with the Strand Theatre for this exciting show in anticipation of the 29th Annual Camden Conference: The New Africa, February 19-21, 2016, live at the Camden Opera House and streamed to satellite venues: Hutchinson Center in Belfast, USM’s Lee Auditorium in Portland and the Strand Theatre in Rockland.

The Camden Conference is a nonprofit, non-partisan educational organization whose mission is to foster informed discourse on world issues through year-round community events, public and student engagement, and an annual weekend Conference featuring distinguished speakers focusing on a central theme related to U.S. foreign affairs. For more information, please visit www.camdenconference.org or call 207-236-1034.