Russia and America in the Arctic (Lecture @ Rockland Public Library) 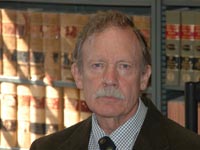 Russia’s resurgence directly affects Maine, as well as Ukraine and the Middle East. It presents major opportunities for our economy and potential threats to our national security, at the same time as complex questions about the future of Planet Earth.

Join Professor Paul Holman for his talk, Russia and America in the Arctic: Conflict, Rivalry, or Cooperation? on Thursday, November 20 at the Rockland Public Library. The event runs from 6:00-7:30PM and is free and open to all.

This lecture will explore an aspect of global climate change that has received too little attention from the media: the melting of the Arctic ice cap. Polar bears and other life forms are in danger, yet new sources of energy, food, and raw materials will benefit the growing population of our world. Indeed, the fabled Northwest Passage—which brought some of the first European explorers to our shores—is rapidly becoming a reality thanks to the melting of the pack ice.

The United States, Canada, and Russia disagree about who has the right to do what in the changing Arctic waters, causing some experts to worry about potential trouble in the region. Others point to a long history of cooperation among the Arctic countries and urge America to deepen its many common interests with all of our northern neighbors. Either way, Russia’s presence in the Arctic involves new challenges for U.S. foreign policy, requiring Americans to make some difficult decisions about our national priorities.

About the speaker: Dr. Paul Holman is a Visiting Professor of International Relations for the University of Maine, Orono, serving concurrently as an Adjunct Professor at the Naval War College. He co-edited a number of books including the multi-volume series Fundamentals of Force Planning, and Ethnic Nationalism and Regional Conflict.

This presentation is hosted by the Rockland Public Library and offered as a free community event in in anticipation of the 28th Annual Camden Conference: Russia Resurgent, February 20-22, 2015.