Refugees and Immigrants from Africa and the Refugee Experience in Africa 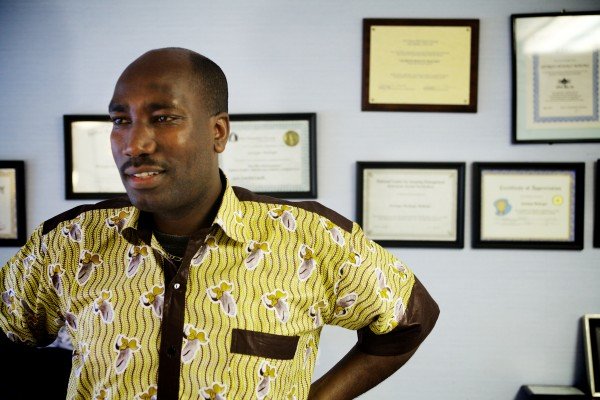 On Thursday, October 6, Georges Budagu Makoko will speak at the Rockland Public Library at 6:00pm. Budagu Makoko — now a Portland resident and award-winning property manager for nonprofit Avesta Housing — detailed his life and harrowing escape from his home country in his book, “Ladder to the Moon: A Journey from the Congo to America.” This event is free and open to all.

In 1994, an estimated 800,000 ethnic Tutsis were killed by rival Hutus in the Rwandan Genocide, a mass slaughter that galvanized Tutsi militants, who in turn overthrew the Hutu government and seized control of the war-torn country. That development drove the heavily armed Hutus into exile in the neighboring countries, including Zaire, in what is now the Democratic Republic of the Congo.

That meant Tutsis in Zaire — like Budagu Makoko — were in danger of attacks by the displaced and disenfranchised Hutus in exile. Budagu Makoko and others like him were faced with a decision: Dig in where they were or travel upstream through the incoming Hutus in hopes of reaching safety in the country the Hutus were evacuating. By October 1994, and the 21-year-old had just completed the treacherous crossing from what was then the African country of Zaire into neighboring Rwanda, and he was happy to simply be alive.

He is now married and recently relocated to Maine, but he said he felt he owed it to his family and friends still in Congo and Rwanda to write a book and raise awareness of the violence they live through every day. Since 1996, about 6 million people have been killed due to the conflicts in the Congo, a figure that’s added to 500,000 killed in nearby Burundi and millions more in Rwanda.

“This is like wiping out the entire population of Maine, New Hampshire and Connecticut in a couple of decades,” Budagu Makoko wrote in his book. “You would think that the whole world would know about a region where 7 million people have died. This is more than a calamity — but, sadly, very few people know about this tragic situation.”