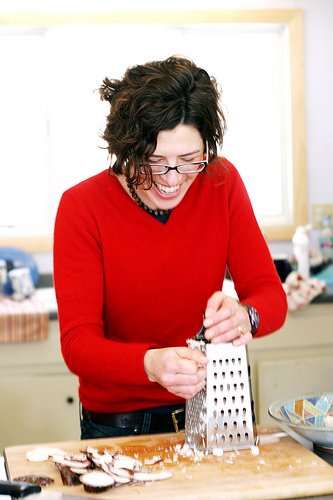 The Portland Public Library hosts Chef Lindsay Sterling on Wednesday, November 2 at 12 noon. She will share her unique perspective on immigration after cooking with immigrants from over 60 countries in Maine. She will introduce us to some of her favorite immigrant foods and stories. Featured will be Ebenezer Akakpo, a Portland jewelry designer who grew up in Ghana and loves a flavor-packed peanut soup; Parivash Rohani, an activist in support of the freedom of religion, who grew up in Iran and loves pomegranate-walnut chicken; and Tarlan Ahmadov, director of programs at Catholic Charities of Maine, who grew up in Azerbaijan and loves beef with chestnuts and sour plums.

After cooking professionally at two of the nation’s top restaurants (Stars in San Francisco, and Fore Street in Portland, Maine), Lindsay Sterling set up an unheard of method for acquiring a niche culinary expertise: She asks immigrants she meets in her everyday life for cooking lessons. Since 2008 she has been sharing recipes and stories from her world cooking adventures in a cooking class series, blog, and newspaper column.

This presentation is hosted by the Portland Public Library and offered as a free community event in in anticipation of the 30th Annual Camden Conference -Refugees and Global Migration: Humanity’s Crisis, February 17-19, 2017. The 30th Anniversary Camden Conference Community Events Series is supported in part by the Maine Humanities Council.