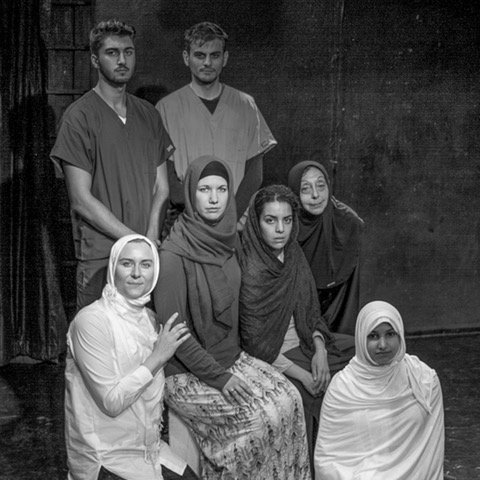 New England Arab American Organization – NEAAO is proud to invite you to a staged reading of an incredible new play Lost and Guided, at Portland Museum of Art – Portland, ME on 06/22 and Camden Orchestra House -Camden, ME on 06/23. Lost and Guided is written and directed by Irene Kapustina from the Angle Project.

Lost and Guided tells the story of how the lives of four young Syrians are changed forever after anti-government protests transpire in the city of Daraa. Throughout the next six years, each of them is forced to undergo a unique and heroic journey, while the turmoil in their country erupts into a full-fledged civil war. From the Middle East to the streets of New Orleans, Lost and Guided is a universal story of love, friendship, and the struggle for happiness.

Lost and Guided is an original play based on interviews conducted with Syrian refugees. Approximately 90% of the script was taken directly from interview transcripts.

The play was produced by Conrad Fisher and The Angle Project in August 2017 and originally ran for 4 consecutive weeks at UNDER St. Marks Theater in New York City.

We look forward to this opportunity to raise awareness about all refugees using the experiences of Syrian refugees. We hope you will mark your calendars and join us for Lost and Guided at Portland Museum of Art in Portland ME on June 22nd and Camden Orchestra House in Camden ME on June 23rd.

Reception including finger food at Portland Museum of Art in Portland, ME on Friday June 22, starts at 5:00pm, Performance starts at 6:00pm followed by post reading panel discussion and Q&A

Reception including finger food at Camden Opera House in Camden, ME on Saturday June 23, starts at 6:00pm, Performance starts at 7:00pm followed by post reading panel discussion and Q&A

The profile from Entertainment Weekly gives a full picture of how and why Kapustina was inspired the write the play:

As an applied theater practitioner, Kapustina’s aims as an artist go beyond entertainment — she (and her theater company, The Angle Project) actively works with displaced populations and their new communities to use drama, play, and performance art to help with social, emotional, and cultural understanding and integration on both sides.

Initially, Kapustina wanted to help resettled individuals through an applied theater community-based project that would encourage refugees to come out and speak about their experiences in their own words. However, she quickly realized that their widely varying language skills combined with their own personal trauma over their experiences made this impractical. This is when she decided to collect their stories and turn them into a play.

Tickets to the Portland Museum of Art event here. (eventbrite)