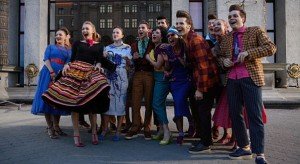 Hipsters (Stilyagi) [2008] will be shown on Friday, January 23 at 7:00 pm in the Morrell Meeting Room. This first title in the Russian film series is about a group of young mods rebelling against the increasing stranglehold of Communism in 1955 Moscow. Filled with great music, stylish clothes that stand out against the gray monotony of the cinder block apartments, and a timeless story of one young man fighting for freedom and love.

The Camden Conference is pleased to partner with Curtis Memorial Library to offer a special film series in anticipation of the 28th Annual Camden Conference: Russia Resurgent, February 20-22, 2015.