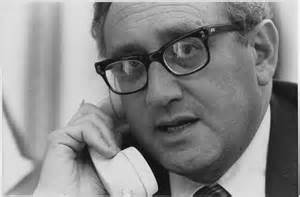 Bob Rackmales will give a talk entitled “Henry Kissinger and Africa” on Tuesday, October 13, at 6:30pm at the Belfast Free Library. This event is free and open to all.

In the summer of 1975, three months after the fall of Saigon ended the Vietnam War, a new front opened in the Cold War in the remote Portuguese African colony of Angola. Although Secretary of State Henry Kissinger had paid little attention to Africa in his previous years in office, his controversial decision to involve the United States in the warfare in southern Africa would have long term consequences for the people of Angola, for US relations with the USSR, Cuba and China, and for Kissinger’s reputation as a statesman. Using recently declassified US, South African and Cuban documents and graphic documentary footage, we will critically examine the events leading to the military defeat of the forces backed by the United States and discuss whether the Angolan War was, as some have called it, “Henry Kissinger’s Bay of Pigs”.

Bob Rackmales’s Africa experience with the Department of State included tours in the US embassies in Lagos, Nigeria, and Mogadishu, Somalia, and as Consul General in Kaduna, Nigeria. He is a member of the Society for Historians of American Foreign Relations and the American Foreign Service Association, and previously served on the Board of Directors of the Camden Conference and the Senior College at Belfast, where he has taught a number of courses on foreign policy and contemporary history.

Hosted by the Belfast Free Library, this event is offered as a free community event in in anticipation of the 29th Annual Camden Conference: The New Africa, February 19-21, 2016.

The mission of the Camden Conference is to foster informed discourse on world issues through year-round community events, public and student engagement, and an annual weekend conference.