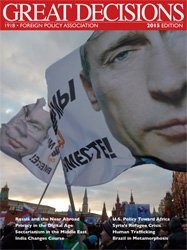 Great Decisions 2015: Russia and the Near Abroad

In conjunction with the Foreign Policy Association, the Southwest Harbor Public Library will be launching its 2015 Great Decisions series with a program on Russia.

As calls for closer ties with the EU failed to be met, Ukrainians took to the streets in November 2013. As the movement, later known as the Euromaidan or “Euro Square,” pulled western Ukraine closer to its European neighbors, another powerful force threatened to tear away the country’s eastern half: Russia. Putin’s pushback against European expansionism has the West wondering: If Putin’s Russia isn’t afraid to take an aggressive stance against Europeanization in Ukraine, what does that mean for the rest of Russia’s neighbors?

Participants will receive guides prior to the program with readings to help them prepare for the discussion. The program will begin with a video followed by a moderated group discussion.

This presentation is hosted by the Southwest Harbor Public Library and offered as a free community event in anticipation of the 28th Annual Camden Conference: Russia Resurgent, February 20-22, 2015.

For more information, call the Southwest Harbor Public Library at 244-7065.