Crossing to the Dark Side: Why I turned my back on objective journalism ~ Tom Fiedler to speak at the Rockland Public Library 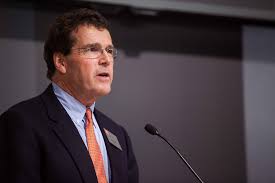 The Camden Conference presents Tom Fiedler at the Rockland Public Library on Thursday, November 7 at 6:30pm. Tom will discuss how, after nearly four decades as a political reporter and editor, he concluded that journalism was no longer sufficient to confront the crisis that he believes is facing our nation. This event is free and open to all.

Thomas E. (Tom) Fiedler served as dean of Boston University’s College of Communication from 2008 to 2019, after a 36-year career as an award-winning investigative reporter, political columnist, White House correspondent, war correspondent, editorial-page editor and, ultimately, as the executive editor of The Miami Herald.

Tom’s reporting on the 1988 presidential election, and particularly his stories exposing candidate Gary Hart’s scandalous affair with a young Miami model, won him the Society of Professional Journalists’ top award. In 1991, his investigative report into an extremist cult’s political tactics was part of a Miami Herald series that won a Pulitzer Prize. Under his leadership as executive editor between 2001 and 2007, the newspaper won two additional Pulitzer Prizes and was a finalist for a third. He also led the newsroom’s transition to multi-media operations, producing journalism not only for the newspaper, but also for television, public radio and the Web.