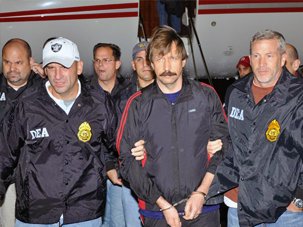 Known as the “Merchant of Death,” Russian arms dealer Viktor Bout achieved international notoriety following his 2008 arrest for supplying weapons to terrorists. This riveting, often black-comic documentary shows two Viktor Bouts: the amiable, upbeat family man who viewed himself as an entrepreneur and the ruthless criminal mastermind who abetted murderers. Bolstered by Bout’s own firsthand accounts and remarkable home video footage of his globe-trotting exploits, The Notorious Mr. Bout masterfully reveals both the man and the myth.

The screening takes place on Friday, September 26, 6:30 p.m. at the Bayview Street Cinema in Camden and will include a post-film Q & A with directors Tony Gerber and Max Pozdorovkin. Admission is $10.00 or included with the purchase of a CIFF All Access or Festival Pass. For more information, please visit CIFF’s website.

Tony Gerber is the director, producer and cinematographer of the award-winning and critically acclaimed film Full Battle Rattle about life inside the US Army’s Iraq simulation in the California desert. He is a two-time Emmy Award recipient and has directed dozens of documentaries for the National Geographic Society in some of the world’s most remote regions.

Raised in Moscow, Maxim Pozdorovkin is an award-winning Russian filmmaker who is the director and producer of feature-length documentaries, including Pussy Riot—A Punk Prayer, and Capital, a city symphony film about the construction of Astana, a utopian city in the center of Kazakhstan. Pozdorovkin holds a PhD from Harvard University and is a junior fellow at the Harvard Society of Fellows.

The Camden Conference is proud to co-present this documentary with the Camden International Film Festival in anticipation of the 28th Annual Camden Conference: Russia Resurgent, February 20-22, 2015, live at the Camden Opera House and streamed to satellite venues: Hutchinson Center in Belfast and The Strand Theatre in Rockland.