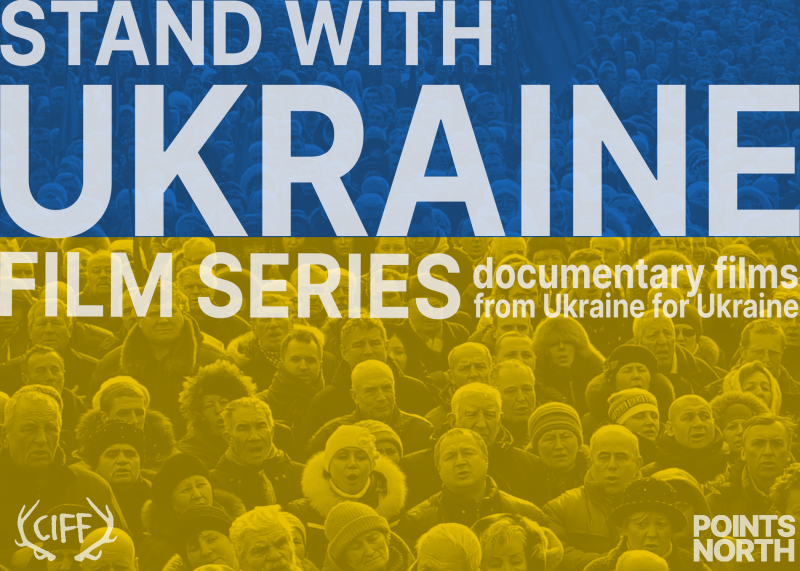 In an effort to support filmmakers currently working in Ukraine, Points North’s Camden International Film Festival has announced a special virtual program of documentary films made by Ukrainian directors that highlight the artistry of a now war-torn nation.

Screening online through March 25, 100% of the proceeds from this initiative – both donations and ticket revenue – are being directed to a special fund established by friends of CIFF, Docudays UA International Human Rights Documentary Festival, to support the needs of Ukrainian filmmakers on the ground in Ukraine, including technical equipment, facilities, and other basic filmmaker needs. Film tickets are by donation only and have been designed to support a sliding scale, starting at $5. Since launching the initiative on March 9, Points North has distributed over $1,000 to the fund, according to Points North, in a news release.

This initiative was made possible by the support of CIFF’s virtual festival platform, Eventive, partner film distributors from across the globe, and local partner organizations such as Pop Tech, the Camden Conference, and Maine Media Workshops + College.

“Over the past eighteen years, CIFF has shared a number of cinematic works by Ukrainian directors. These works – both in terms of their artistry and their depiction of resistance, resilience, and the role of art – have moved us deeply,” said Ben Fowlie, Executive and Artistic Director of the Points North Institute and the Founder of CIFF. “At Points North and CIFF, we stand with the Ukrainian people, the Ukrainian filmmaking community, and with all who have been subjected to the aggression of an oppressor.”

ALL THINGS ABLAZE (2014) Oleksandr Techynskyi, Aleksey Solodunov, Dmitry Stoykov | 2014 | UkraineWhat does the violent heart of revolution feel like? As the anger and hatred glow white-hot is there a language its players use to speak to one another? And what becomes of the gun-toting authorities when their fiefdom is destroyed, nobody is any longer afraid, and all things are ablaze? Just some of the questions addressed in this visceral documentary from Maidan square in the violent Ukrainian winter of 2013-14.

CLOSE RELATIONS (2016) Vitaly Mansky 2016 | UkraineVitaly Mansky’s intimate and insightful documentary finds him crisscrossing Ukraine in the wake of the Maidan uprising, which has left his relatives scattered on both sides of a highly charged and dizzyingly complex political situation.

EVERYTHING WILL NOT BE FINE (2020) Helena Maksyom, Adrian Pirvu | Ukraine The two directors of this personal documentary begin a relationship based on their separate struggles: Hers with backbone pain, his with vision as a result of the Chernobyl disaster 25 years before.

MAIDAN (2014) | Sergey Loznitsa | UkraineA chronicle of the civil uprising against the regime of Ukrainian President Viktor Yanukovych that took place in Kyiv in the winter of 2013/14. The film follows the progress of the revolution: from peaceful rallies, half a million strong in the Maidan square, to the bloody street battles between protesters and riot police.

THIS RAIN WILL NEVER STOP (2020) | Alina Gorlova | Ukraine, SyriaThis Rain Will Never Stop takes the audience on a powerful, visually arresting journey through humanity’s endless cycle of war and peace. The film follows 20-year-old Andriy Suleyman as he tries to secure a sustainable future while navigating the human toll of armed conflict. From the Syrian civil war to strife in Ukraine, Andriy’s existence is framed by the seemingly eternal flow of life and death.

NO OBVIOUS SIGNS (2018) | Alina Gorlova | UkraineNo obvious signs – the phrase, which Ukrainian soldiers hear in hospitals, where they come with physiological traumas, needing help. What is left backstage of the heroic videos of our warriors in Ukraine? What do they have to face, one on one, in peaceful life, and where does the war stop?

MY FATHER IS MY MOTHER’S BROTHER (2018) | Vadym Ilkov | UkraineTolik, an artist in the Ukrainian underground scene, is raising his niece Katya, a stubborn little girl who has taken to calling him Dad. Her mother, Anya, is both at the heart of the film and almost doomed to the fringes, adrift between solitude and stays in a psychiatric hospital.

Points North is currently in the process of locking additional films for the series, advising audiences to check back for updates. Please visit pointsnorthinstitute.org/support/ukraine/ for more information.