China-Maine trade: What’s at stake? –a panel discussion at USM 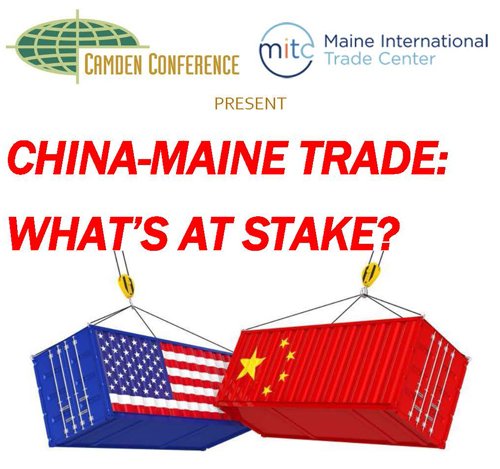 Maine’s trading relationship with China has nearly doubled in the last 10 years.

Much of that has been fueled by a growing Chinese middle class clamoring for lobster.  New tariffs and trade agreements, however, could temper that growth.  And by extension, foreign investment and even recruitment of Chinese students by Maine schools could be affected.

Join us to explore how this trade can affect the economy of Maine.  Learn from the firsthand experience of Mainers involved in or advising on this fast-moving and multi-faceted scene.

Presented by the Camden Conference and Maine International Trade Center, the panel will be moderated by Carol Coultas, business editor of Portland Press Herald/Maine Sunday Telegram, partners for the event, along with the University of Southern Maine.

There is no cost to attend.  Advance registration is encouraged.

Carol Coultas, business editor at the Portland Press Herald, has been a professional journalist for more than 35 years. She spent 22 years at the Sun Journal, nine of which as managing editor, followed by more than five years as the editor of Mainebiz.

In 2014, she joined the Press Herald, where she oversees a staff of five reporters who cover wide-ranging business and economic issues, including trade.

In 2006, as a fellow with the International Center for Journalists, she traveled to Brazil to write about its emerging paper industry. The piece won a national writing award from the Society of American Business Editors and Writers.

A transplant from Massachusetts who moved to Maine in 1986, Coultas has finally convinced her Bay State family members that living in Maine is not a phase. She is married with two grown children, one of whom is a business journalist in New York City.

Previously, he served as Vice President of Maine International Trade Center. In this capacity, Mr. Merritt was responsible for supervising the staff and day-to-day operations, including trade missions, technical assistance, and programming. Additionally, he had primary responsibility for the StudyMaine initiative and assisting Maine’s education sector.  During his time with MITC, he has organized multiple trade missions to 15 different markets, most recently to China and Japan.

Mr. Merritt served as President of SIDO, the national association of state trade offices, and advocated for greater cooperation between state trade offices, the federal government, and small- and medium-sized businesses nationwide.  For this work, Mr. Merritt was given the Distinguished Service to the States Award from the Council of State Governments in 2014.  In addition, he has also spoken at national and international events on NAFTA, trade with Canada, and the state-federal relationship in setting national trade policy.

Mr. Merritt serves on the boards of the Eastern Trade Council, the Maine Citizens Trade Policy Commission, the Maine District Export Council, and the International Committee of the Council of State Governments. A graduate of the University of Maine with a degree in International Affairs and Canadian Studies, he resides in South Portland, Maine with his wife Colette and daughter Camille.

Joseph W. McDonnell, a professor of Public Policy and Management at the Muskie School at the University of Southern Maine (USM), secured a Confucius Institute for USM and served as its director from 2013 -2018.  He has been to China many times, most recently to bring 20 USM students to study this past summer in Dalian China at the Dongbei University of Finance and Economics, USM’s partner university.  McDonnell has authored articles on China that have appeared in the Portland Press Herald and the Bangor Daily News. He came to Maine in 2011 to serve as dean of the professional schools at USM and subsequently also served as USM provost.  Prior to coming to Maine, McDonnell served as dean of the business school at Stony Brook University in New York.

Brian McNamara has been the President & CEO of Southworth International Group for more than 25 years. He has also served on the Material Handling Industry’s Board of Governors for more than 20 years. Combined these experiences have provided him with an extensive view of the packaging, movement, and storage of goods all around the globe.

Southworth International is based in Falmouth, Maine with multiple North American facilities as well as subsidiary offices and factories in Sweden and China. The company is primarily focused on products that improve the ergonomics of goods handling in industrial and warehousing workplaces.

Southworth first ventured into China in 1988 via a joint venture located in Taiyuan City in Shanxi Province…This location was later identified by National Geographic as the most polluted city in the world…not to mention its unheated hotels with wooden mattresses and rusty, cold shower water.

Today Southworth is consolidating two small factories in the manufacturing hub of Wuxi where blue skies are hazy but no longer a rarity… and Marriott Courtyards vaguely resemble the ones we know.

Brian has been business traveling in China several times each year since 1991. On one hand, he is well experienced in most of the things that you can do wrong in the “Wild, Wild East”. Yet on the other, Southworth has enjoyed many years of successfully exporting simple subassemblies back to its North American operations; is currently amid a massive multi-million-dollar contract with one of China’s largest SOE’s; while all in all continuing to struggle in its attempt to gain solid traction in the China domestic market.

Annie Tselikis’s fourteen-year career in Maine’s marine industry started on the stern of a ferryboat in Portland Harbor and has evolved to cover the entire coast of Maine as she has focused on the lobster industry supply chain.

In July 2014, she became the first executive director of the Maine Lobster Dealers’ Association which represents and advocates for lobster wharves, wholesalers, and processors in Maine. Previously Annie worked for Maine Coast, Garbo Lobster, the Maine Lobstermen’s Association, Penobscot East Resource Center and Island Institute as an Island Fellow in Stonington.

Annie graduated from Connecticut College and serves on the boards of the Maine Lobster Marketing Collaborative and the Lobster Research, Education, and Development Fund.