BLESSED OR CURSED: SAINT PETERSBURG THROUGH THE LENS OF LITERATURE 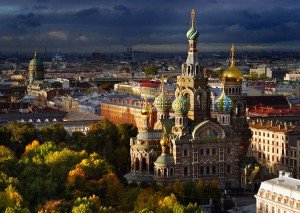 Beginning in 1703, Peter the Great’s visionary city rose from the Baltic marshes in less than fifty years, requiring the importation of stone on a scale second only to the Pyramids, at the cost of thousands of lives of serfs and soldiers who built the city with their hands. This much lauded majestic city was predicted in folklore to be a doomed city. Immortalized in literature, Saint Petersburg has been the scene of great suffering and destruction. In this class, we’ll explore the high society world of Pushkin’s Eugene Onegin; the much loved, lost world of Nabokov’s memoir Speak Memory; the squalor and desperation of Dostoevsky’s Crime and Punishment; as well as a picaresque survival tale from the Seige of Leningrad in David Benioff’s City of Thieves. In the final class, led by Peggy Watson, we’ll explore the poets of the twentieth century, Akhmatova and her circle, what she meant to all of St. Petersburg, and the legacy she bequeathed to Joseph Brodsky, our poet laureate and Nobel Prize winner.

Excerpts from these books will be included in handouts that will be distributed the week before the class in which they will be used.

Elizabeth Garber earned a B.A. in Humanities from Johns Hopkins University, studied Greek Epic at Harvard College, has a Masters in Acupuncture which she has practiced for 30 years, and has a MFA in Creative Writing. She has written four books of poetry and an as yet unpublished memoir, called Implosion: A Memoir of an Architect’s Daughter; none of which prepares her for teaching this class, other than her lay-reader’s passion for reading and studying Russian literature and history.

Margaret Watson is a landscape artist and a practicing poet with a turn toward nature on the page. With a Traveling Scholar Prize from the Museum of Fine Arts in Boston, she spent time at the American Academy in Rome doing research on ancient landscapes and became particularly interested in St. Petersburg and its surrounds. Over the past twenty years, she has spent time there and in Moscow, attentive to the poets that gathered there. Since then she has followed Joseph Brodsky’s exile and life in the United States.