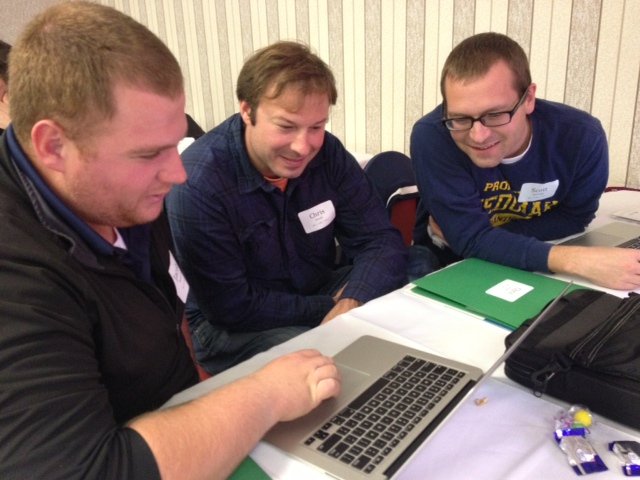 The new Curriculum Enrichment Program (CEP), which is based on the 2013 Camden Conference, was introduced to Maine social studies teachers at their annual conference in Augusta, on November 8th. Will Galloway, creator of the CEP, led the workshop for over 30 teachers, showing them how to use the video clips excerpted from the full presentations at the 2013 Camden conference. The video clips highlight four features of Global Affairs: Culture, Conflict, Policy, and Globalization, which can be used by teachers in a variety of courses on global issues. During the workshop teachers worked in groups on their own computers to explore all CEP video clips, from 2010 to 2013, using this Global Affairs model as their lens. Will also demonstrated how teachers can use the many Camden Conference website resources in their classrooms.

To create the 2013 CEP, teachers from around Maine attended a workshop in June, 2013, which was led by Will Galloway and Judith Masseur, of Watershed School in Camden, along with Charlie Graham, the CEP Program Manager for the Camden Conference Education Committee. The CEP project has been made possible by grants from the Pauline A. Lerner Foundation, Maine Humanities Council, and Camden National Bank, and also from in-kind donations from members of the Camden Conference organization.

Many teachers expressed interest in testing the new 2013 CEP in their classrooms with students, and also in becoming “CEP Fellows”, supporting the future improvement of the program with advice resulting from their classroom experience. Almost all of the participating teachers commented that they will use the CEP for instruction on global issues. In addition, many teachers seemed eager to attend the 2014 Camden Conference, several of them wanting to bring their students.

For more information, please visit the Curriculum Enrichment Program section of our website.