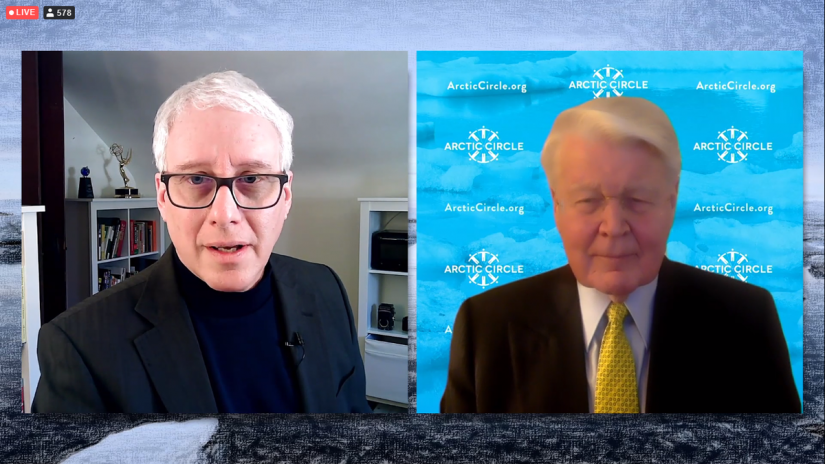 CAMDEN — During a week in which cold weather led to a disaster in the southern states, hundreds connected through the Camden Conference with experts on the arctic region and climate change.

Olafur Ragnar Grimsson, began his keynote speech by illustrating how the arctic is now at the center of climate change and critical shifts in geopolitical relationships around the world.

Grimsson is the former president of Iceland, elected five times, and serving from 1996 to 2016. He is the current chairman of the Arctic Circle, the largest annual international gathering on the arctic with more than 2,000 participants from 60 countries.

The arctic is no longer a peripheral “world of polar bears, indigenous peoples, remote areas and a lot of ice,” but has now “become a core territory” in respect to climate change and “the new geopolitical race between the United States, on one hand, and China, and to some extent Russia, on the other,” Grimsson said.

This is due to the aggressive melting of the artic sea ice and of Greenland’s ice sheet. He also explained that this melting is “the major cause of extreme weather not only in the Americas but in Asia and other parts of the world.”

Grimsson said this melting caused the crisis in Texas, causing millions to lose power and water due to freezing temperatures, snow and ice storms.

“As the arctic warms up, it brings snow frost and cold weather to the southern United States. People find this paradoxical, but it is one of the reasons why China, Japan, India, Korea and other Asian countries are now actively participating in arctic science and research,” he said.

“If only a quarter of the Greenland ice sheet melts, that will mean a global rise in sea level of about two meters.”

That type of sea level rise will make most of the big cities in the world, which are coastal cities, uninhabitable, he said.

Grimsson spoke about something he saw about 10 years ago, that he will never forget. It was a slide shown at a conference.

The leader of a Chinese expedition to the arctic, “put on the screen a list of Chinese cities that would completely disappear with the melting of the Greenland ice sheet.”

Every continent is profoundly affected by what happens to the ice in the arctic, he said.

He used a more recent recollection of Donald Trump saying “let’s buy Greenland” to illustrate “the new power race in the 21st century between the United States, China and Russia.”

When Trump said that, the media laughed. But “this was in fact quite a sensible proposition, if Greenland was for sale,” he said.

The mining potential in Greenland is crucial for any high tech company and critical to the future competition between the major economies in the world, according to Grimsson.

“You can’t have mobile phones, your computers, solar panels or your electric car without some access to similar minerals or metals that can be found in the arctic,” he said.

“They are used in your new fighter planes. Recently in the news, China has decided to limit the export of rare earth metals to the United States. This decision has a big impact on the capabilities of the United States military,” he said.

The quest for various minerals, even those needed in “green” technologies can create new problems. Norwegian politician and indigenous speaker, Gunn-Britt Retter, talked about the flexibility of the Saami people to shifting weather patterns, adding that mining materials for green energy production is now possibly a bigger threat to their survival.

Turning to his second reason for the arctic’s geopolitical centrality, Grimsson talked about energy development in the Russian artic tundra, which is rich in energy resources.

Russian and China celebrated an 8,000-kilometer pipeline from Siberia all the way to Shanghai, he said.

Areas of the frozen Russian tundra, where before there was absolutely nothing, are now seeing energy development on the scale of Qatar, with harbors for shipping gas to different parts of the world.

Korea is in the process of building 15 supertankers to transport energy from Russia.

This Russia-Asia connection, involving Russia, China, Japan, Korea and even India, is increasingly dominating the energy picture and markets.

If the United States wants to continue to use energy as a tool in its geopolitical strengths, it will be increasingly difficult because of the energy resources in arctic Russia.

Grimsson also talked about how other countries will dominate the clean energy market, if the United States does not shift its policies.

Greenland, Iceland and islands in the northern part of Norway have the potential of clean, renewable hydro and geothermal energy to be transported via ocean cables to Europe.

Iceland now uses 100% clean energy, because it was good business to move away from oil and coal, he said.

In recent years, clean energy, solar, wind, geothermal has become so cost-effective, countries such as Iceland have found these sectors do not need subsidies, he said. They are a better business than the old fossil fuel model.

Maine is another geographically peripheral area being drawn into the arctic’s political orbit, according to Grimsson.

The unfortunate melting of the artic sea ice is opening a new shipping route, the so-called northern sea route, that will link Asia to Europe and America the way the Suez and Panama canals did a century ago, he said.

Maine is the eastern gateway to this route for the U.S.