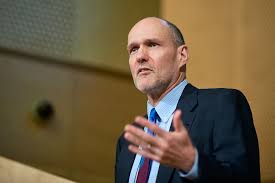 CAMDEN CONFERENCE IN THE WORLD-June 2019

With trade and other geopolitical mayhem seeming to greet us in the headlines each morning over the last month, it’s hard not to see the 2018 Camden Conference theme of “New World Disorder” as prescient. Stephen Walt, 2018 keynoter and Belfer Professor of International Affairs at Harvard, has been thinking along similar lines, listing on his Foreign Policy blog five global problems that “are getting worse – and may never get better.” These “Bad Things” start with climate change, move onto the potential collapse of both the two-state solution for Israelis and Palestinians and of the European Union, and conclude with a nuclear crisis with Iran and the collapse of America’s long-standing Asian alliances due to its clash with China.

Our 2019 keynoter, best-selling author and Cambridge professor Martin Jacques, discussed the impacts of that American clash with China on not just the US’ Asian allies but also on its arguably best and oldest friend in Europe, the UK, on Britain’s Channel 4. Against the backdrop of a trade war with the US and resulting distancing of China from the West, 2019 speaker Yasheng Huang, Professor of Global Economics and Management at the MIT Sloan School of Management, frets in the Nikkei Asian Review that the Belt and Road Initiative that we heard so much about at this year’s conference may lead Beijing into dangerous over-involvement with troubled Asian neighbors.

Another of Walt’s “Bad Things,” a potential crisis with Iran, was tackled last month by 2013 speaker Seyed Hossein Mousavian, a former senior Iranian foreign policy official and now at Princeton’s Woodrow Wilson School of Public and International Affairs. In The Cairo Review of Global Affairs, Mousavian uses a historical approach to argue that improved relations between Iran and Saudi Arabia are achievable and that Tehran would and could play a positive role in applying a model for Middle East conflict resolution in which “all parties involved … first identify an end-state of the negotiation process.”

The weather-related disasters accompanying climate change were addressed by Director of the Internal Displacement Monitoring Centre Alexandra Bilak, a speaker at the 2017 Camden Conference on “Refugees and Global Migration: Humanity’s Crisis.” In a joint article with the UN Secretary-General’s Special Representative for Disaster Risk Reduction Mami Mizutori, Bilak makes a case for the necessity of collecting better data on such disasters and then using it effectively to manage the risks and impacts of population displacement.