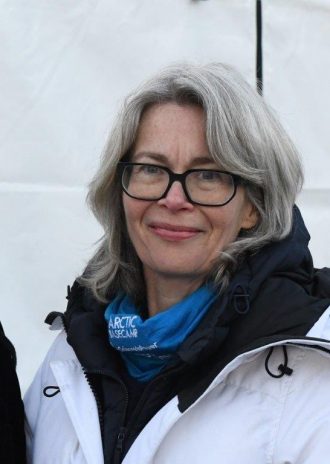 Camden Conference in the World-February 2021

“It is comforting to imagine the Arctic as a snowy faraway place, populated by reindeer and polar bears. In fact, it is a cornerstone of the climate system that keeps our weather stable, our communities habitable, and our economies prosperous – and it is under immense pressure,” Gail Whiteman, one of the lead-off speakers at this year’s Feb. 20-21 Camden Conference, wrote recently on Project-Syndicate. Whiteman, a professor of sustainability and founder of the science-communication platform Arctic Basecamp, developed  with the World Economic Forum at Davos to “speak science to power,” relates how “even those of us who follow the Arctic closely were shocked by the changes that occurred in 2020, a year of broken records, retreating glaciers, and shattering ice sheets. The alarm bells are ringing louder than ever.”

The complexity of climate change impacts in the Arctic were brought into stark relief from a very different perspective when Norwegian indigenous reindeer herders filed suit in January, charging that a planned windfarm would interfere illegally with reindeer migration paths. ““It’s a paradox, really,” another 2021 Camden Conference speaker, Sami Council leader Gunn-Britt Retter, told the Guardian. “You are squeezed between the impact of climate change and the impact of green energy, which is the answer to climate change.”

Meanwhile, speakers from past conferences continue to wend their way into the public debate on a variety of issues as wide as the spectrum of conference topics in years past. In sizing up the new Biden Administration’s likely approach to China, 2019 – and 2006 — Camden Conference participant and director for Asian Studies at the Council on Foreign Relations, Elizabeth Economy, lays out a counter-intuitive view: “While it may appear as though these last-minute actions [taken by Trump on China] will make it more difficult for the incoming Biden administration, the opposite is true. The more policies the Trump administration piles on, the greater the leverage and range of options it leaves for the Biden team.”

Cas Mudde, a 2017 Camden Conference speaker, pointed out in his Guardian column following the storming of the US capitol building last month that far-right extremists have attacked government buildings or politicians recently not just in the US, but in Germany, the Netherlands, Hungary and other spots, as well. The roots of the problem lie in “a long process of cowardice, failures, and shortsighted opportunism of the mainstream right,” asserts Mudde, who besides being a professor and active public commentator, has started a new Podcast, RADIKAAL, “about fascists, punks & ultras.”

Also concerned about the future of Western democracies, Stephen Walt, 2018 Camden Conference keynoter and Belfer professor of International Affairs at Harvard, proposes that Biden convene a “democracy summit.” The purpose would be, not to unite democracies against Russia and China or spread the “liberal gospel,” but rather “to organize a forum where the world’s democracies can consider how to strengthen themselves in the face of the dangers that threaten them from within, including corruption, weak electoral institutions, racism, and social media.” Walt in the same article quotes two multi-conference Camden alumni, Chas Freeman and Nicholas Burns. Burns recent co-authored a report on “A US Diplomatic Service for the 21st Century.