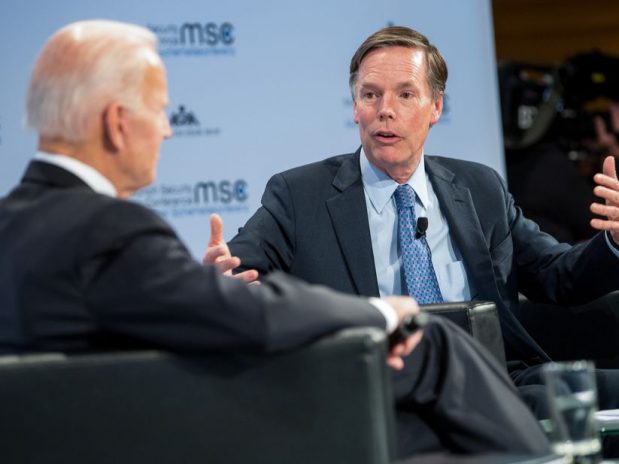 CAMDEN CONFERENCE IN THE WORLD-DECEMBER 2021

A roadblock arose in multi-Camden Conference participant Nicholas Burns’ path to becoming US Ambassador to China when Florida’s Republican Senator Marco Rubio put a hold on his nomination to the post by President Joe Biden. Burns’ long career in the foreign service has been “defined by the failure to understand the threat posed by the Chinese Communist Party,” Rubio announced by way of explanation on Nov. 16. The Senate Foreign Relations Committee in October approved Burns nomination after a hearing at which Burns was seen by most as taking a tough line on China, and White House press secretary Jen Psaki said after Rubio’s move that Burns “is somebody who could effectively do the job from the first day.” An exploration of the issue later in the month on National Public Radio’s All Things Considered came up with no clear way out of the impasse, although expectations remain that Rubio’s move will delay rather than derail Burns’ nomination.

Jason Rezaian, an Iranian-born journalist and speaker at Camden 2020’s conference on the Media Revolution, wrote in his Washington Post column about his fellow 2020 Camden speaker Maria Ressa’s problems in getting permission from the Philippine government to travel to Norway to receive the Nobel Peace Prize she is being awarded for her efforts in defense of freedom of the press. The United Nations later joined in urging the Philippines to let Ressa go to the Dec. 10 award ceremony.  Rezaian also recently recounted tales of his own and his wife’s time in an Iranian prison and the extraordinary efforts made to get them out in a new multi-part podcast “544 Days”.

Fyodor Lukyanov, a 2015 Camden Conference speaker whose star continues to rise in the Russian foreign policy firmament, made a splash last month by arguing that long-standing ambiguity in Nato’s stance on expansion, notably to Ukraine, is no longer constructive and “must somehow be resolved.” One possibility, the Valdai Discussion Club research director suggests in an article in to the Russia in Global Affairs journal that he edits, could be to “redefine ‘Finlandization’ – the Cold War idea whereby countries retain their sovereignty but stay out of the geopolitical fray – as something positive.”

EU Ambassador to the US Stavros Lambrinidis, who will be keynoter at the upcoming Feb. 25-27 2022 Camden Conference, chose climate change as a key part of his theme in helping to dedicate a “Love-Hate” sculpture in Washington DC late last month, while the COP26 UN climate conference was in progress. “We have to turn the hate for this planet into the love for this planet … there is still time,” he told a crowd at Washington’s Farragut Square. In late October, Lambrinidis had joined up with EU ambassador to the United Nations Olof Skoog to take the case for joint EU-US action on the climate to the heart of the US oil patch. The two argued in an op-ed in the Houston Chronicle: “Killer floods and fires like the world saw this summer may already be with us. But at COP26, it is still entirely possible to keep that trend from getting out of control.”

Kathleen Merrigan, a former deputy secretary of agriculture and speaker at Camden’s 2014 Food and Water conference, sees organic food as an area of climate policy where the US should be emulating Europe’s more supportive policies. Noting that the US imports organic food from Europe because it doesn’t grow enough to meet demand at home, Merrigan recently explained in the opinion website The Conversation: “The US isn’t currently setting the bar high for growing its organic sector. Across the Atlantic, Europe has a much more focused, aggressive strategy.”