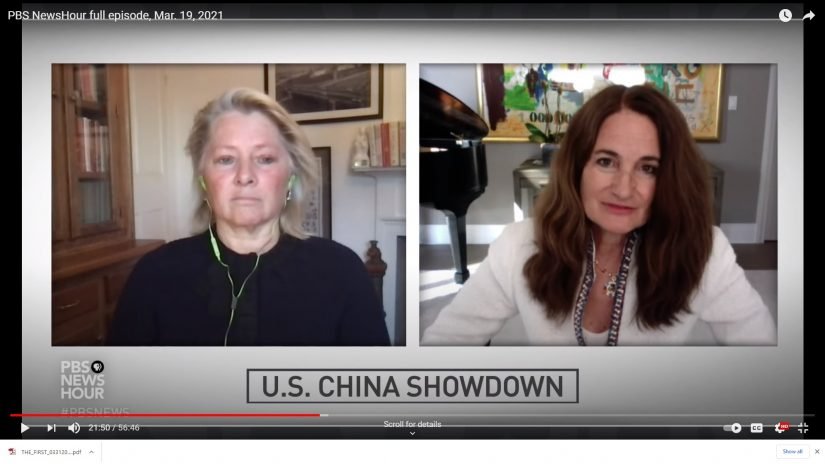 Camden Conference in the World-April 2021

Numerous past Camden Conference speakers in March provided a multidimensional display of the changing nature of US-China relations. Immediately after senior Biden Administration officials met with their Chinese counterparts in Alaska, two 2019 Camden Conference speakers appeared on PBS News Hour. Former assistant secretary for East Asian and Pacific affairs Susan Thornton led off about what had been unexpectedly antagonistic opening remarks: “I think that the circus in front of the cameras at start off was a bit unfortunate… but it looks like they were able to savor something for the end.” Elizabeth Economy, in contrast, saw the meeting as a chance for the new administration to lay out “the foundational principles of the U.S.-China relationship, one rooted in values and alliances and multilateral institutions.” She added, “The path to getting actual constructive cooperation will be much more challenging.” Thornton later indirectly referenced her home in Lisbon, Maine: “Maybe it is because I live in a rural part of the country where people just get stuff done, but I really think we need to calm down a bit about China.”

Few other speakers from Camden’s 2019 conference on “Is This China’s Century?” seemed inclined to be calm. The US showed no sign of “eradicating the toxicity from the Trump administration” at the Alaska meeting, Chinese Foreign Minister advisor Wu Xinbo, the director of the Center for American Studies at Fudan University in Shanghai, told the government-sponsored China Development Forum. Wu provided a more detailed analysis of China-US relations to The Diplomat, back in January. In the run-up to the Alaska meeting, the Woodrow Wilson Center’s Robert Daly gave a remarkably similar assessment of both the likely meager accomplishments from Chinese-US diplomacy at this time – and the continuing importance of the US-Chinese relationship.

The 2019 keynoter, Martin Jacques, currently a visiting professor at two prestigious Chinese universities, portrayed Beijing’s stance in Alaska as a clear indication that China is already laying claim to a position of equality with the US on the world stage. Cleo Paskal, who was at Camden’s 2018 conference on “New World Disorder” and is now at both Chatham House and the Foundation for Defense of Democracies, took a sharply differing, anti-Chinese stance in an interview at the recent Conservative Political Action Conference (CPAC). Also in March, Paskal published a Chatham House paper showing “wider willingness to push back against China,” based on research in the US, UK, India, France, Japan, Tonga and China itself.

Returning to 2019 speakers, in a recent episode of the podcast Left, Right and Center, Kaiser Kuo talked about how, to compete with China, “we have to focus on ourselves. Run faster and quit trying to trip the other guy.” It’s a formulation he attributes to President Joe Biden and with which he is in “complete agreement.” (Start just after minute 35 in the podcast).  Ma Jun, director of the Institute of Public and Environmental Affairs in Beijing, told China’s Global Times, climate change “is a rare place where China and the US could share a consensus currently.”

Keynoter from 2021, former Iceland President Olafur Ragnar Grimsson, approached global cooperation on environmental issues from a different – although not opposing – angle:  “You need a new geopolitical model, you cannot simply put renewables into the old coal and oil model,” Grimsson said, implying that the scattered nature of renewable energy, as opposed to oil, should make it less likely to provoke conflicts.

The Rappler news site she founded did a study on the nature of the government-orchestrated social media campaign against Maria Ressa on social media, and Ressa’s fellow 2020 conference speaker Kathleen Hall Jamieson talked to Politco about sorting “consequential” errors in news coverage from those of less importance.