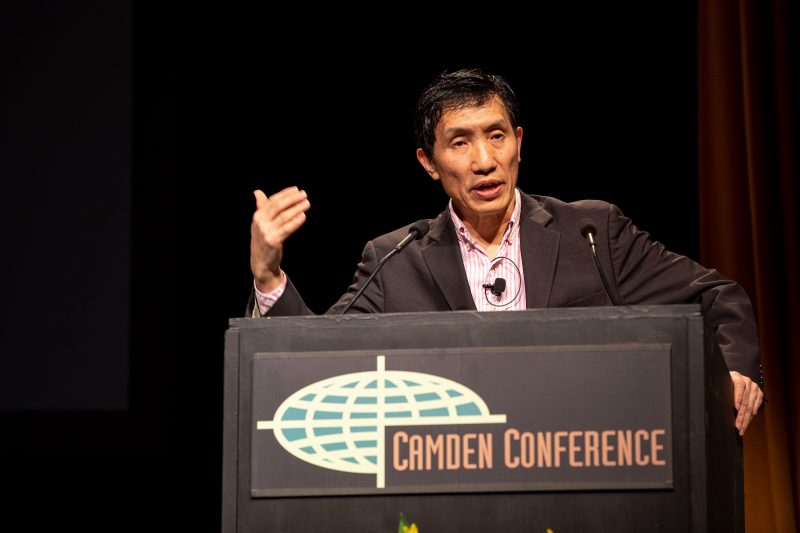 Camden Conference in the World-April 2019

The themes that dominated the 2019 Camden Conference on “Is This China’s Century?,” and the speakers who came to the Midcoast to address them, remain in sharp news focus. Two 2019 speakers, MIT professor Yasheng Huang and retired senior US diplomat Susan Thornton, again shared the stage at an Intelligence Squared debate on The “Techonomic Cold War with China.” The two agreed – in opposition to the other three debaters – that China’s Belt and Road initiative is a “Trillion-Dollar Blunder.”

With Chinese President Xi Jinping on a tour of Europe in March aimed in part at furthering the Belt and Road initiative, 2019 speaker and University of Michigan professor Yuen Yuen Ang argued in a Newsweek interview that Europe should be cautiously open to working with Beijing. Likewise, when interviewed by France’s RFI during Xi’s visit, 2019 keynoter and author Martin Jacques suggested that good relations with China could be key to Europe’s future.

Yet another 2019 conference participant, Yuki Tatsumi, co-director of the East Asia Program and director of the Japan Program at the Stimson Center in Washington, co-authored a report that came out in March on Rebuilding the Quad: International Disaster Response. It looks at the potential for cooperation between the four Indo-Pacific states of India, Japan, Australia and the US in disaster relief and, following on from that, perhaps other areas.

Like disaster assistance, migration and refugees – the topic of the 2017 Camden Conference — remain a hot-button issue across much of the world. During an extensive trip through East Africa last month, 2017 conference speaker Kelly Clements, the United Nations Deputy High Commissioner for Refugees, lauded the generosity of Kenya, which has hosted refugees for decades, despite the threatened closure of the the Dadaab camp. Uganda received appreciation from Clements, as well, for hosting more than 1.2 million refugees.

Clements’ fellow 2017 speaker Cas Mudde, a Guardian columnist and University of Georgia professor specializing in political extremism and populism, expressed hope that the Special Counsel Robert Mueller’s findings will push Democrats in the US to focus on issues voters really about, starting with economic redistribution and social justice. Another Guardian commentator and a 2018 Camden Conference speaker, Natalie Nourgayrede, took the view in her column in March that US President Donald Trump and Secretary of State Mike Pompeo are using the ideological battle over nationalism and migration to threaten the very existence of the European Union.