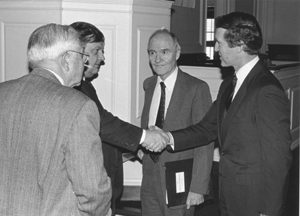 The Monday, February 22, 1988 edition of the Bangor Daily News carried two news reports on a conference held the previous Saturday in Camden entitled “The Making of American Foreign Policy: Myths and Realities”. The three most prominent speakers at the first in what is now approaching a quarter century of Camden Conferences on Foreign Relations, were Brent Scowcroft (soon to be named National Security Advisor in the first Bush administration); Senator William Cohen (later to serve as Secretary of Defense in the Clinton administration); and Lawrence Eagleburger (soon to be named Deputy Secretary of State).

Read about “We are not a Paper Tiger” Senator William Cohen at the first Camden Conference here. 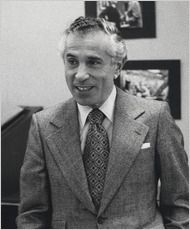 Seymour Topping retired from the New York Times in 1993. He served until 2002 as a professor of international journalism at Columbia University and administrator of the Pulitzer Prizes. Now professor emeritus, he lectures in the United States and China, where he heads the International Advisory Board of Tsinghua University. Topping spoke at the second annual Camden Conference in 1989.

In 1989, when the second Camden Conference focused on “The Influence of the News Media in Shaping Foreign Policy”, radio, mainstream television, newspapers and news magazines comprised “news media.” Cable television was in its infancy. Blogs, Twitter, Facebook, email photos and videos and wiki-leaks did not exist. Journalism was a profession; citizen journalists were not even in anyone’s mind. 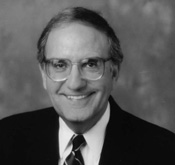 Former Maine Senator George Mitchell, who recently returned to private life after serving as President Obama’s Middle East envoy, participated in past Camden Conferences. His first appearance was at the fourth conference, in 1991 – The Global Environment: A Foreign Policy Agenda. Although the Mitchell panel was only one of five major events at that Conference, it received the lion’s share of attention from the local journalists who covered the event.

Ambassador James F. Collins is Director of the Russia and Eurasia Program at Carnegie Endowment for International Peace. He is an expert on the former Soviet Union, its successor states, and on the Middle East. Amb. Collins gave the keynote address at the 1994 Camden Conference.

The 1994 Conference featured an impressive level of comment and questions from speakers and attendees alike. Panelists provided a clear picture of whom the Russians had become, the many problems they faced, and U.S. interests in the rapidly developing, very complex transformation of Russia in a new world in which former Soviet allies and 14 Newly Independent States (NIS) had gained independence from Moscow’s rule. And questions from the audience, in response to those informative presentations, prompted additional thoughts and observations about what was taking place at that time – giving all those present a better idea of how Russia and the Russians were coping with their new circumstances.