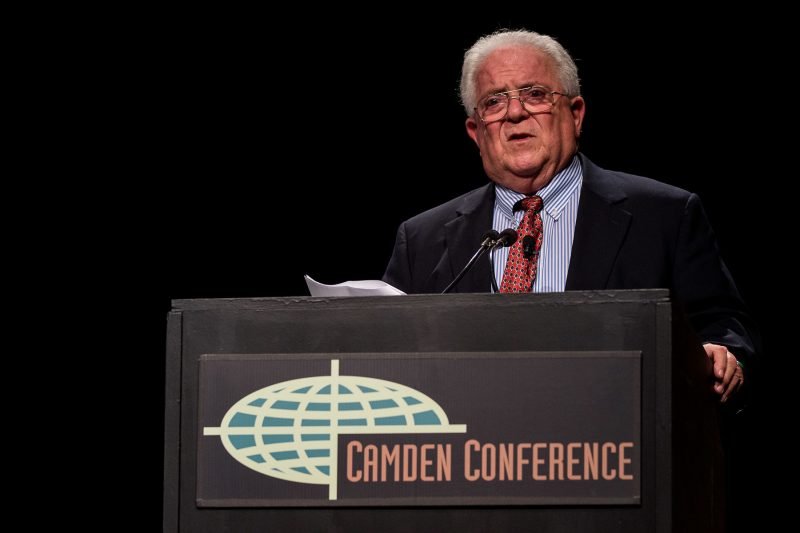 The 2018 Camden Conference wrapped up on Sunday, February 18 to acclaim from the audience of over 1100 as well as from the distinguished speakers. Columnist and former White House Bureau Chief of The Wall Street Journal, Gerald Seib, who spoke on Saturday, mentioned the Camden Conference and quoted Sunday speaker, Ambassador Chas Freeman, in his latest article that posted yesterday. The full text of Chas Freeman’s speech “This Too Shall Pass,” from which Seib quoted, can be read HERE.

The Russian effort to disrupt America’s political system—detailed in indictments by special counsel Robert Mueller’s team of investigators last week—isn’t the only sign that the democratic model is in peril.

President Donald Trump’s angry Twitter reaction to the indictment of Russians for interfering in the 2016 American election misses the broader and more frightening point: Democracy as we know it is in peril, and potentially in decline.

In a weekend tweetstorm, Mr. Trump focused on the fact that the indictment didn’t show the Russians colluded directly with his campaign. And he asserted the FBI is spending too much time on its investigation of Russian meddling.

The first assertion is certainly true, but the second one is hard to justify given the gravity of the findings in the indictment. It lays out a sophisticated and sustained Russian effort to use technology, social-media manipulation and traditional covert measures to disrupt America’s political system—an effort that appears to be continuing.

Frightening as that is, it also isn’t the only sign that the democratic model—long seen as the most promising force for world peace and prosperity—is in danger. By two other new measures, democracy is slipping as a global force. And by any measure, the performance of America’s own democracy is undermining its power as a model for others.

The Freedom House, an independent organization that has monitored freedom globally for 77 years, last month released its annual democracy index, a measure of the health of democracy around the world. In doing so, it declared: “Democracy faced its most serious crisis in decades in 2017 as its basic tenets—including guarantees of free and fair elections, the rights of minorities, freedom of the press, and the rule of law—came under attack around the world.”

Freedom House found that 71 countries suffered “net declines” in political rights and civil liberties, while only 35 registered gains. “A quarter-century ago, at the end of the Cold War, it appeared that totalitarianism had at last been vanquished and liberal democracy had won the great ideological battle of the 20th century,” the report says. “Today, it is democracy that finds itself battered and weakened.”

Meanwhile, the annual democracy index produced by Economist magazine’s Intelligence Unit found that 89 of 167 countries received lower scores in 2017 than they had the year before. The index looks at 60 indicators spanning the electoral process, government functions, political participation and civil liberties.

It now rates the U.S. as a “flawed democracy” because of a polarized political system and a decline in trust in its institutions. Spain’s score fell because it tried to stop an independence referendum in Catalonia by force. France’s score fell because its legislature passed a law expanding the government’s emergency powers.

The Freedom House report notes that both Russia and China are trying to step into the vacuum created by a decline in the power of the democratic model. “A confident Chinese president Xi Jinping recently proclaimed that China is ‘blazing a new trail’ for developing countries to follow,” the report notes. “It is a path that includes politicized courts, intolerance for dissent, and predetermined elections.”

Perhaps most distressing, the reports together suggest that a decline in confidence in American democracy, as well as the Trump administration’s failure to promote democracy abroad, are contributing to the trend.

Certainly the performance of America’s current, sclerotic version of democracy isn’t especially inspiring. The power of the American system is supposed to be its ability to bring people of differing views to compromises that allow action. Yet the two most significant legislative acts of the last decade—a new health-care plan under President Barack Obama and a big tax cut under President Trump—were passed and signed into law almost entirely on party-line votes. There was no compromising.

At the moment, there are two burning issues on which public polling shows Americans have clear preferences: They want stronger background checks for gun purchasers (something the White House said Monday it also supports), and favor a path to legal status for the so-called “Dreamers,” immigrants brought here as children. Yet Congress has consistently failed in efforts to enact stronger background checks and is currently failing to devise a formula to deal with Dreamers.

The reason? Lawmakers listen more closely to the louder and more politically potent activist bases of the left and right than to voters in the middle. This frustrates many of those in the electorate’s broad center, but they may have only themselves to blame. For them, the answer isn’t to check out of democracy, as many have done, but rather to get more involved.

At the annual Camden Conference, a weekend gathering in Maine to discuss foreign-policy issues, a distinguished retired American diplomat, Chas W. Freeman Jr., declared: “Everybody who votes for someone who says, ‘I will never compromise’ is contributing to gridlock.” He also warned that an erosion in America’s democratic institutions leads in turn to a diminished ability to lead the world in the direction America wants.

And that is precisely the trend Russia wants.