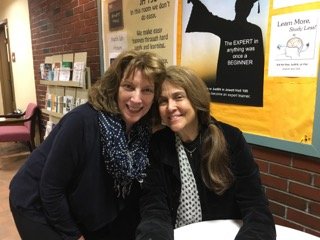 Education programs of the Camden Conference are designed to promote knowledge, perspectives, and dialogue opportunities on world affairs with high school and college educators and their students. Academic courses are now offered in Maine high schools and colleges on the Camden Conference, which are linked to the rich resources from current and past Conference presentations. We are committed to having 20% of Conference attendees be students. Zoe FitzGerald-Beckett, a UMA student attendee of the 2017 Conference, Refugees and Global Migration: Humanity’s Crisis, was moved to create an award-winning poem which she titled On the Edge. In her own words, this is her story:

“In December of 2016, the Cushing Library ran a three-part series on the theme of the 2017 Camden Conference – Refugees and Global Migration:  Humanity’s Crisis.  What a  thought-provoking and informative event it was, with powerful and poignant poetry that cut to the heart of the topic of the conference:  65 million people are now displaced, on the move, homeless.  How do we respond to that fact?

Ellen Goldsmith, a poet and teacher, organized and moderated the event. In her opening remarks, she suggested that “poems about the immigrant and refugee experience…might provide a feeling as well as a thinking entry into this year’s Camden Conference topic.” Each poem read at the event provided a different lens through which attendees were able to view the enormity of the crisis. All of them highlighted the human beings at the heart of this crisis of “human-ity.”

I was finishing up a Creative Writing Course at University of Maine in Augusta at the time, and one of the assignments was to write a poem in a fixed format such as a sestina, a sonnet, a pantoum, or a villanelle. Inspired by the library event, I wanted to write a poem about the refugee crisis. I chose the sestina, which proved a challenging new way to write poetry for me. But I soon realized that the requirements of the structure actually provided a container of sorts to hold such a huge topic.

My poem, On the Edge, was the result.  I was encouraged to enter it into the annual Plunkett Poetry Festival at UMA, and I was honored that it was chosen for the First Prize in the Student Poetry category.  As a poet, I am always looking for a finished piece to find its place in the world.  I was glad that it had it’s “debut” to the world at UMA where it was written and nurtured through the workshops in my class. I was also thrilled that I had a chance to read it to the public at the festival where Naomi Shihab Nye, the celebrated Palestinian-American poet was a keynote speaker.

The “thinking/feeling” entry idea came full circle for me, as I was then motivated to enroll the next semester in a history course at UMA based on the Camden Conference, which I attended in February of 2017. As always, the presenters there were a veritable gold-mine of experienced and highly-informed experts on the issue.   Before attending the conference, I re-read the Cushing Library poems and my own.  It occurred to me that in future it would be a wonderful addition to the conference if some poetry was worked into the day’s presentations, to serve as a balance to all of the important information shared there. As the Camden Conference brochure stated, the refugee experience is a crisis of our common humanity. What language can speak to that? I would suggest poetry can serve as a universal language that can help us understand the realities of the crisis, and serve to balance the enormity of the factual information we need to know, opening the door to the creative solutions so urgently required to address the issue.

The novelist, Anna Quindlen, has said, “the way most of us experience poetry is the heart coming around the corner and unexpectedly running into the mind.”  I believe that heart-mind approach is exactly what is needed to come to grips with the immensity of the refugee crisis in a positive way. It’s what I sought to bring to consciousness in my poem, On the Edge.”

Scientists believe murmurations are similar to other systems,
such as crystals forming; avalanches; metals becoming magnetized, and liquids turning to gases.
These systems are “on the edge” … ready to be completely transformed in an instant. *

At this time, we still do not know what small god
may have them in hand. Until further information
(truth, lies) is gathered, we must act on what we do know:
a murmuration, 65 million and counting, is on the move
given marching orders by the usual rogues of war
(and their by-blows) that change homeland into wasteland.

At this time, you may want to look at your own land-
scape, the one inside that keeps you awake talking to some god,
asking what to do should this cloud of humanity at war
(with war) force you to move, from your favorite information
source, (your favorite chair); force you to quick hustle move
for fear is running rampant. What to do? You want to know.

The last lullaby she sang to her babe (in sweet sleep) you might know.
The fish he caught that last blue sky day, in his waters, from his land
might make your mouth water, familiar and hungry; and might move
you from complacence to compassion. Or might not, if you and that small god
are in dispute. Your brain might still demand even more information;
while hopeful hearts still beat (they can’t help themselves) against the drums of war.

When you take time to look, turning this over and over again, it is war-
torn bodies, minds, and spirits that stare back at you. Deep down you know
there but for the grace of, goes your whole world. Your bags of information
you’d frantically empty, packing instead all (memory, longing) of your land,
land you will leave far behind. You too would cling (of course you would) to any god
in hopes it might come with you, now one of the lonely, the wretched, on the move.

What drives them out won’t let them back, though they would move
heaven, and earth; and risk raging rivers (of loss, of grief) from war after war
to find a welcome home, a place of warm baths, and good coffee. And (god
help them) they would knock down walls and paint all doors golden, for they know
behind all that lies a wild new humanity, awaiting its rebirth; spit back onto land
that belongs to no one (it never did). What now to make of this information?

A new murmuration (fledglings in flight) readies itself to rise, refusing information-
saturation; driven by old instincts and new hopes. The ocean’s ceaseless move-
ment, with its moon-tides and sun-washed shores, calls always to the land-
less millions; each wave promising welcome to these mighty women and their men-not-of-war.
Their journey from home-towards-home remains tempest-tost (this we all do know).
Yet even now we can lift the lamp; the beacon still burns, making each of us a small god.

65 million stories swirl and soar around us; information perhaps from the god of all lives
that are on the move, of everything that is uprooted, upended. Even the land quakes,
watching us at war again and again; asking us again and again, what more do we need to know?